We made it to AFRICA!!!! It is a dream come true!! After a very long flight from Dublin to Cape Town via Istanbul we have arrived. It was one of the most comfortable flights we had ever been on and our first of many with Turkish Airlines. We caught up on so many movies and even had some really good airplane food. Our layover was in Istanbul from Midnight to 2am so we thought we would be roaming around a sleepy airport but it was quite the opposite. I think this airport is operating at full speed 24 hours a day! If you look at the flights coming in and out you realize that they are the gateway airport for any country in the world. Some of the countries we didn’t even recognize and it makes you realize how big the world really is!

When most people think about visiting Africa there are a few things that you picture in your head. Let’s demystify what it means to arrive in Africa:

Do you see an animals roaming the grasslands as soon as you arrive?? Do you land in a dirt runway?
No, not at all. Cape Town is a normal big city. It reminded me a lot of Ft. Lauderdale with a big downtown and in the beach areas you have beaches on one side of the road and the chic hotels and restaurants on the other. It will be a while until we see some of the big African animals.  We did see some animals near Cape Town but they are not what you would expect. Read on to find out what we saw!

Do you need to be wearing safari gear when you arrive??
No, but we did see some people in their safari pants and hats. They were definitely tourists!

Was it safe??
Yes, we stayed in a very safe area and we walked around at night to the restaurants. We will share with you a link to our accommodations and a little bit about the area and rental at the beginning of each section.

Was the food different??
No, we had a good international mix of Asian, Greek, Italian, Seafood. The most important thing about food in South Africa is the braai. A braai is an open grill.  It doesn't matter what is cooked as long as it is grilled. We quickly realized when we were booking our rentals that the braai is equally important to have as a bathroom.

We stayed in Africa for a month and we split our time between two different areas - The Garden Route and Kruger National Park.

What is the Garden Route?? It is a well known drive between Cape Town and Port Elizabeth with several towns to stop at along the way. Each one offering different activities and animal encounters. From Port Elizabeth we flew to Johannesburg to start our journey to Kruger National Park.

Accomodation:
AirBNB rental – a two-story townhouse in the Sea Point neighborhood. We were finally able to wash our clothes!! Yeah!! We were a little smelly when we arrived after traveling around Ireland without access to a washing machine. We were also able to work on our itinerary for the Garden Route and book the rest of our accommodations while we had wifi at the townhouse. The neighborhood also had some great restaurants and we had a fun evening in a Greek restaurant that we could walk to from our townhouse. It was an evening complete with gyros, Greek salads, fire, and breaking plates.


What we did in Cape Town:
We booked a few extra nights in Cape Town to catch up on some sleep and recover from our long travel days. It worked out really well since Emma ended up catching a cold on the way down so she need an extra day of rest to feel normal again.

There is a lot to do around Cape Town but the one thing that hits you as soon as you arrive is the HUGE mountain in the middle of town called Table Mountain. It has a very flat top so the name fits. The catch to visiting Table Mountain is that you need to have a clear day to really enjoy it. Luckily, our first full day in the city was beautiful so we were able to take the cable car up to the top.


We were surprised how much walking around there was to do when we got the top. We ended up spending several hours hiking and stopping at the café for hot chocolate. It was a bit breezy and cool at the top. We also met an animal called a Rock Dassie. We had never seen one before and it was love at first sight for Sam. The Dassie became his favorite animal in Africa.


While Emma recovered the next day from her cold, we took the boys to a bobsledding park called Cool Runnings. They had a blast on the slides but Sam was right at the border for being able to go by himself. He was determined to ride solo and finally convinced the park to let him go down alone.


Emma was feeling much better the next day so we took a trip down the cape peninsula to Simon’s Town. We were going south to see our first African animal – the African penguin! Yes, you read that right….a penguin. A long, long time ago before we had kids when I worked at Microsoft I met a group of people from South Africa when I was in Seattle for orientation. We became friends and they told me some cool things about their country and the one fact that stuck in my head for all of these years was the fact that they had penguins!! I thought these flightless birds lived in Antarctica. Do they really live in Africa??? I couldn’t believe it when they told me and now I couldn’t believe that we were actually driving down the coast to see them.

Before we made to the beach where the penguins live we stopped in town and ate our first South African boerewors sausage at a little outdoor market downtown.


After our fun with the penguins we decided to take a different route to Cape Town via  Chapman’s Peak. The drive was stunning with a beautiful rocky coastline and breaking waves below. Again, we lucked out on weather because if the weather is unfavorable they will close this road. 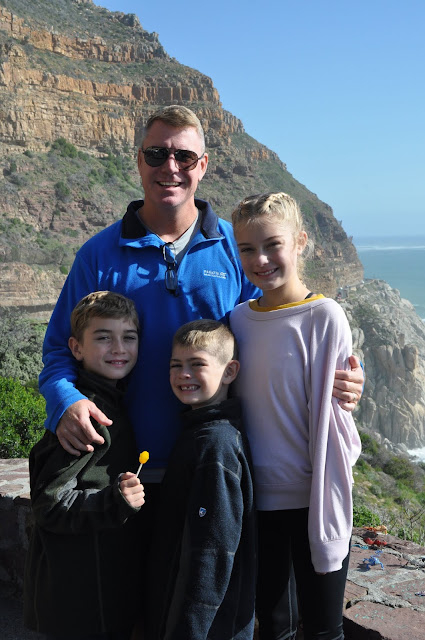 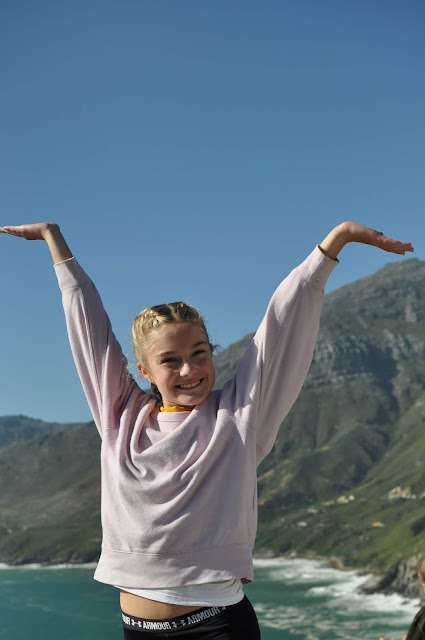 Our next stop after Cape Town is a short drive to Stellenbosch (aka. the wine country). I can't wait to share with you our time in the vineyards and how we celebrated a national holiday in South Africa.
- November 26, 2018