The Luck of the Irish!

Dates: September 13th – 18th
Total Miles Driven in Ireland: 600
Rental Car: Renault Captur (another tiny car)
Our next stop on our trip is Ireland. We left bright and early in the morning for the quick 1-hour flight from Edinburgh to Dublin. We chose to stay in some of the smaller towns in Ireland and just briefly saw Dublin going in and out of the airport. We also found that Ireland was a little bit more expensive for accommodations, so we stayed in share house rentals for the first time. This would be different than our normal whole house rentals and we were not sure what to expect especially traveling with the kids. There will be information about each house, a link to the AirBNB page, and pictures at the beginning of each section.

Accommodations:
Airbnb Shared House – We stayed about 30 minutes from Galway in a little town called Gort. The house that we stayed in was HUGE!! We met the very nice owners when we arrived, but they pretty much stayed in their wing of the house when we were there. They had horses and dogs but it was pretty rainy and cold so the kids didn’t get a chance to play outside. They had other rooms to rent but for the first night it was just us so we had the whole communal living room and dining room all to ourselves. They also had a cart of board games and we had some late nights playing competitive Monopoly.


What we did in Gort/Galway:
Our first night in Gort was rainy and we were pretty beat from the early morning wake up call, so we headed to a local pub and had toasted sandwiches with a pint of Guinness and the bartender made the kids a local favorite drink called the Mr. Waddie (orange cordial and water).


The next day we took a bit of a drive to the Connemara National Park. The drive was beautiful, and we had a fun hike around the park. The views were stunning on the hike.  We packed a picnic lunch to have along the way and stopped and played with the donkeys and horses. Before we left we had a little fun at the playground. 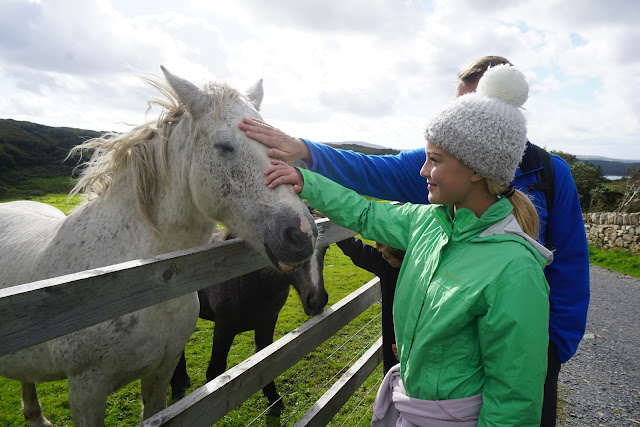 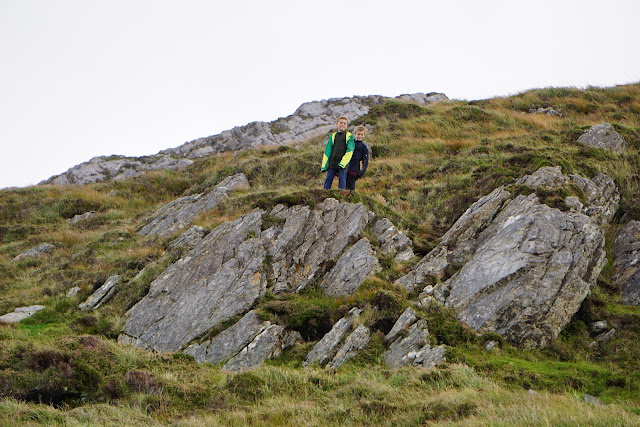 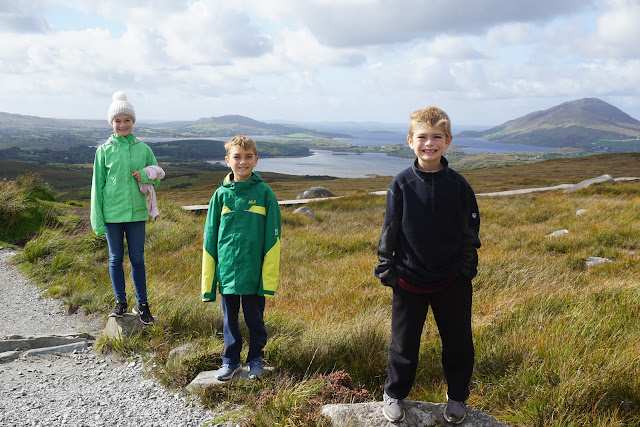 On our way back to Gort we stopped to spend a few hours in Galway. There was lots of activity with live music in the streets and lots of shops. It was pretty touristy but we found a great Chili/Burger Bar restaurant that was kind of off the beaten path for dinner. Before we arrived we thought we would be able to enjoy some Irish tavern music but we found out that they start playing pretty late in the night and most of the places were not kid friendly.
Killarney
Accommodations:
Airbnb Shared House –  For our second stop, we stayed about 30 minutes away from Killarney in a pretty rural area. This was truly a home share experience. We had two bedrooms and our own living room, but it was a normal family home so we had a chance to interact with the family. We will always remember this stay because of the animals that they had – a dog (Winnie), a donkey (Neddie), and a horse (Ben). Our hosts (Kay, Larry and Marisa) were very kind to us and let the kids feed the donkey and horse while we were there. They also made us a traditional Irish meal of Bacon, Potatoes and Cabbage. This meal rated the best we had in Ireland.
What we did in Killarney:
The town of Killarney was our favorite Irish town. The downtown area was a lot of fun to walk around with fun candy shops, stores, restaurants, and a much needed barber for Dan and Sam. The barbers never asked what kind of haircut they wanted they just started cutting. We realized most men/boys in Ireland have the exact same haircut so call it the Irish Cut.
We also visited a very cool sweet shop that had a hidden staircase and when you opened the door they had cardboard cutouts of the Willy Wonka characters. The kids loved this and the owner introduced us to the Irish candy called the bon-bon. It was my favorite candy on the trip. It tasted like a Starburst on steroids with a much better texture.
After eating a few meals, we also learned that the potato is by far the most important food in Ireland. It comes with every meal and sometimes in a couple of different forms. We ordered Shepard’s Pie for dinner one night and they asked if we wanted potatoes or fries with it. I was confused and asked if there were potatoes on the top of the pie. She said yes but then asked what kind of potato I would like on the side. That is a lot of potato for one meal. We also found out that chips (french fries) come with your bacon and eggs in the morning.

We decided to go to Killarney National Park for a bike ride on a beautiful Sunday afternoon. This was voted the best bike ride on our trip. The trails were really nice and we passed lakes and castles along the way. At the end of the day we calculated that the bike ride was around 20 miles – longest ride so far for the kids.

With Sunday being beautiful and sunny, we woke up on Monday and it was rainy and cold. This was our down day and we found an indoor water park that was very empty since all of the local kids were in school. They even had a nice adult spa section with steam rooms an saunas. Dan and I jumped from steam room to steam room (they had 4 different ones) and the kids played on the slides, wave pool, and lazy river. Since it was pool area we didn’t take any pictures since our stuff was in a locker. It was great to have a down day before we spent the next two days traveling to South Africa!
- November 19, 2018