Our hurricane season adventure begins in the big apple. Dan and I have both been to NYC but this would be the first visit for the kids and they were very excited. But there was a little catch to our visit. Out of all of the places we would go during the next two months, New York would be the easiest to get back to in the future, so we told the kids we would need to have a tight budget for this leg of the trip and save more fun money for the other locations. We quickly realized that the typical attractions like the Empire State Building, a Broadway show, 30 Rock would be out of budget when you multiplied everything by 5 people. We know they will come back another time to experience these parts of NYC. They did a great job researching and making a list of things to do while we were there.

Here is their list of the top things they wanted to do. These lists made us realize sometimes we need to simplify the list in our adult heads.

Emma – eat some cool desserts and take some pictures in Central Park, Times Square, and the Brooklyn Bridge


Sam – ride a bike and have a great birthday


Where would we stay???
It is easy to say you will keep a budget but your budget in NYC can quickly go under with lodging. The price to stay in the city for 5 nights was pretty steep. So we looked at other areas and ended up in the Bay Ridge neighborhood in Brooklyn. We stayed on the first-floor apartment of a traditional Brooklyn brownstone. After reading so many books set in Brooklyn I was very excited to see Brooklyn and to actually stay in one of the brownstones. Our hosts, Rob and Gino, did a great job restoring the brownstone and we were within walking distance to restaurants, stores, bodegas and the subway. They even had a razor scooter for the kids to ride around the area. Click here to see it on Airbnb

Coney Island
Since we were in south Brooklyn we decided to spend our first day in Coney Island. The kids had a great time picking out a few rides and all of us rode the iconic Wonder Wheel and with $5 burning in their pockets that had a great time with the arcade and carnival games.


City Highlights
We learned that there are some really great things to do around the city that are free or very close to it and it turns out they were more fun for the kids than the typical attractions.

Bike Riding in Central Park –
This was a huge highlight of our trip. Central Park is beautiful and if you are on a bike you can ride through the whole park. We rented 5 bikes for 2 hours for the same cost as a 10-minute horse and carriage ride. After living on a boat for a while the kids were very excited to get on some bikes. ($55)


City Walking & Times Square–
New York is a great walking city. You can see some cool buildings, good people watching, and maybe even run into an event. When we were there they had Brazilian festival that covered several blocks right downtown. When you reach Times Square you can spend some time just taking in the scenery and people. (Free)

Walking the Highline –
This was a very cool elevated walking trail around the Chelsea neighborhood. It was an old train track that has been converted into an elevated garden and art trail. (Free) 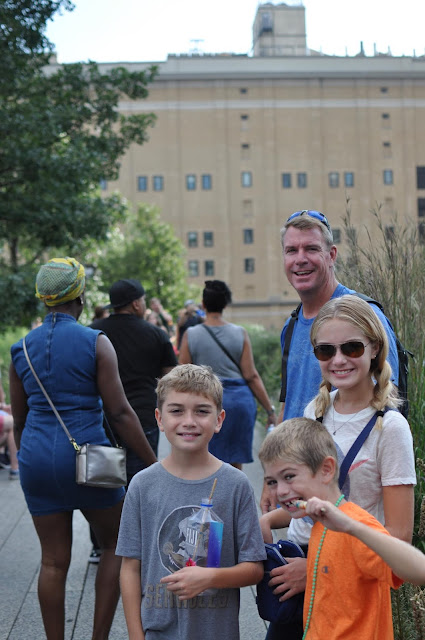 911 Memorial –
This was the first time that we have been to NYC since the memorial was built. It is a beautiful memorial that brought back a lot of memories of that day in 2001. (Free)

Governors Island –
We didn’t even know that this island existed in NYC. It is an old military island that has been turned into a park and is just a small ferry right from the terminal. We found it when we were looking for bike riding options for Sam’s birthday. There are no cars on the island and they have bike and walking trails, container restaurants, playgrounds and even some glamping tents if you want to stay there. Not on the normal tourist itinerary so we primarily saw locals taking advantage of the island on Labor Day (aka…Sam’s Birthday). (Ferry cost: $3 round trip per adult and kids are free. Bikes $55 for 2 hrs)

Walking the Brooklyn Bridge –
This was a big item on the list and something none of us have ever done. It was very cool to walk to the top of the bridge and see the cars driving below you, the city skyline and the water. (Free)

Good Eats –
To our surprise we did really well with our eating out in the city. This can be a pretty big expense in the city but if you look around you can find some great places to eat that cost a lot less. Street food is a given in NYC. We had some good gyros, hot dogs, etc.. We also ate quite a bit around our Brooklyn neighborhood and the prices were very reasonable. Chinatown and Little Italy were two of the spots in the city that we ate dinner. Joe’s Shanghai in Chinatown was the biggest surprise and proved to be our favorite restaurant throughout our trip and we ate big dinner of soup dumplings, noodles, and drinks for under $50.

How did we get around?
The subway and lots of walking. New York is such a great walking city and I do not think a day went by when our feet were not sore at the end of the day. The subway was easy for the longer trips from Brooklyn into Manhattan and we even ended up taking it all of the way to the airport when we left NYC.

Provisions –
Besides seeing the sights of the city we also had some things we had to do to get ready for our trip abroad. Everyone needed a backpack for their luggage and we all need a few clothes (long pants, long sleeved shirts). Everything you took had to fit in your backpack. No rolling luggage or big duffels on this trip.

This was a great first stop on our trip and it surprised both Dan and I how much fun we had in the city. The kids had a blast and they voted that the favorite thing they did was the bike riding in Central Park. When we head back to Grenada we are going to try to do another bike ride in the park (if it is not too cold) and eat another round of dumplings at Joe’s.