The holidays were quickly approaching and the SandStar Crew was excited to arrive in Martinique. We had heard from other cruisers it was the “go to” stop for provisions and shopping. The kind of shopping we have not seen in months. We decided to make the two day sail up from Bequia and skip St. Vincent and St. Lucia. We planned to return to St. Lucia after the new year and  St. Vincent we skipped for security reasons. All of the cruisers we have met bypass St. Vincent and after looking into the security risks we decided to do the same. We did get a small glimpse of St. Lucia by Q flagging in the Piton anchorage our way north. What is Q flagging? Normally when we move to a different island you check in with customs and immigration but if you only stop for one night, do not leave the boat, and take off the next day that typically doesn’t require a check in – it is called Q flagging.

The Piton anchorage was stunning!! One of the most beautiful anchorages we have ever seen. It is set right in between Gros Piton and Petit Pition.  You have to grab a mooring ball since the depth between the pitons is over 100ft. We knew just based on sheer beauty that we would have to return to this anchorage in January. 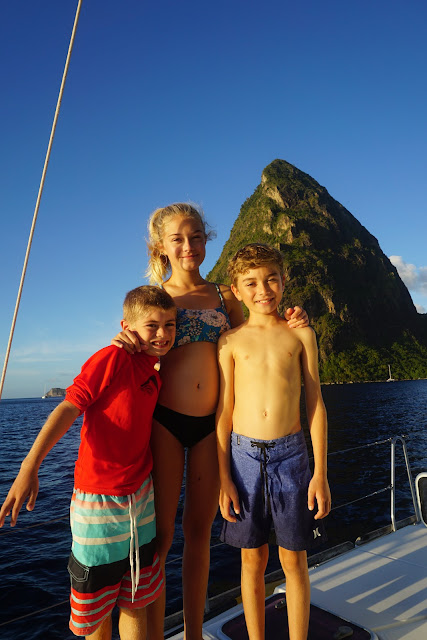 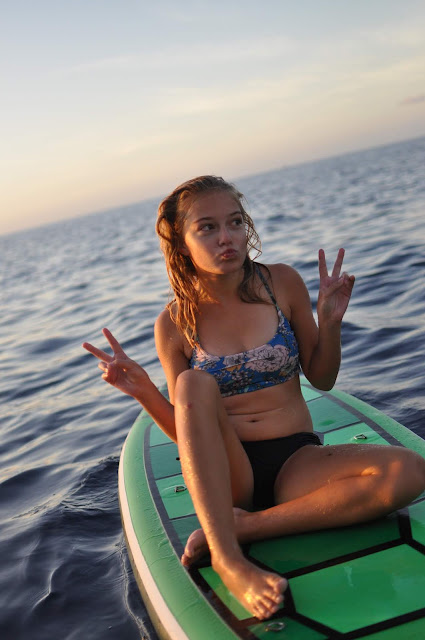 After leaving the Piton anchorage the next day we ended up grabbing a little take out from the waters of St. Lucia – our very first Wahoo!!! Dan has been working on trying to catch this fish for over a year! It looks very similar to a big king maceral or a barracuda. After lots of high fives and a fishy photo shoot we put him in the cooler to share with friends when we arrived in Martinique. We grilled him up with our friends from SV Izula and SV Lazy Travels. Stacy from SV Izula also told us how to make fish cakes with the left over grilled fish the next day. That is one of the great things about cruising. You can learn something from everyone you meet and since you are meeting new people all of the time it feels like you are learning all of the time! 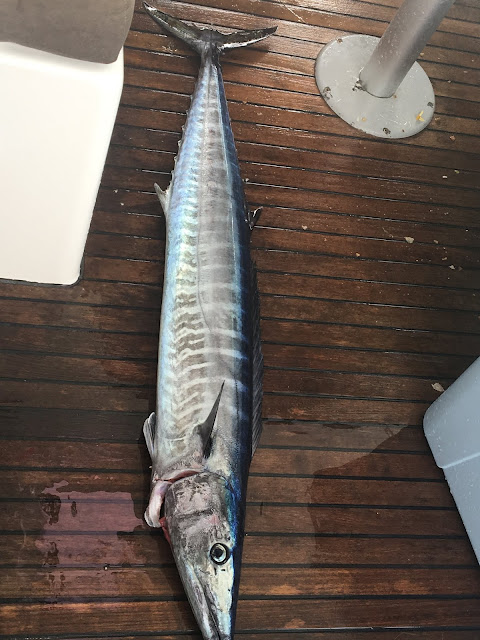 Martinique would be our first experience in the French islands. We quickly realized they are very different from the other islands in the Caribbean. They have lots of resources from regular stores, grocery stores, boat stores – you name it, they probably have it. They also have a full highway system. This is something we have not seen in any of the islands. After getting our bearings which included a few trips to the French bakery we decided to rent a car to do a little Christmas shopping.


Guess what?? It is universal anywhere you go that stores are packed around the holidays! There are big box stores in Martinique similar to a  Walmart or a Target and they were packed wall to wall!  We even found a couple of malls. I only ended up with a few pictures because we were trying not to lose anybody in the mess of shoppers and were battling our way in the crowded roads around the stores. Everyone was pretty beat after a few days of shopping but we had food in the fridge and presents under the TV.

This was our second Christmas on the boat and we really enjoyed it. It is hard to go overboard on gifts and such when you have limited space. It really makes you think about what you want to gift to somebody. On Christmas morning the kids had stockings and their traditional Santa Scavenger Hunt which had a Monopoly board game as the gift at the end. We all ended up gifting each other body wash, deodorant, or soap. I am pretty sure that says a lot about our cruising – sometimes it can get a little smelly around here!  We will always remember our island holidays! 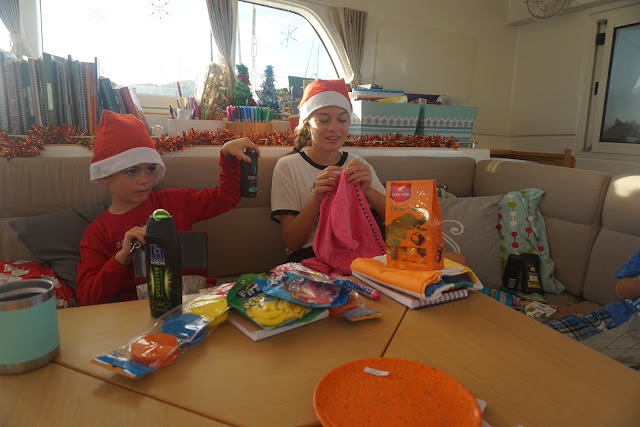 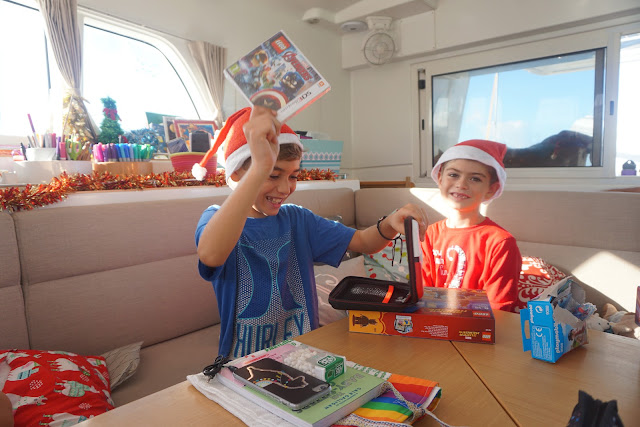 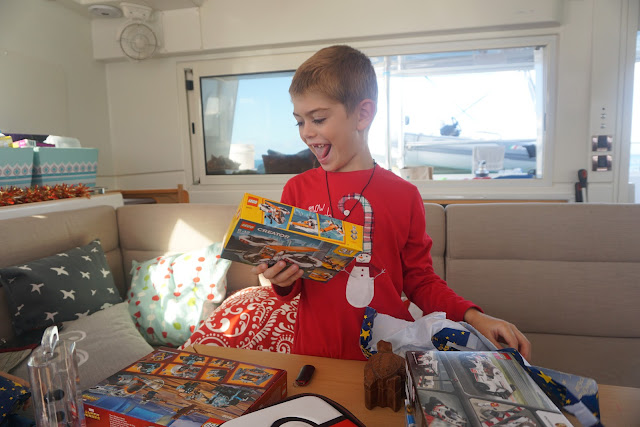 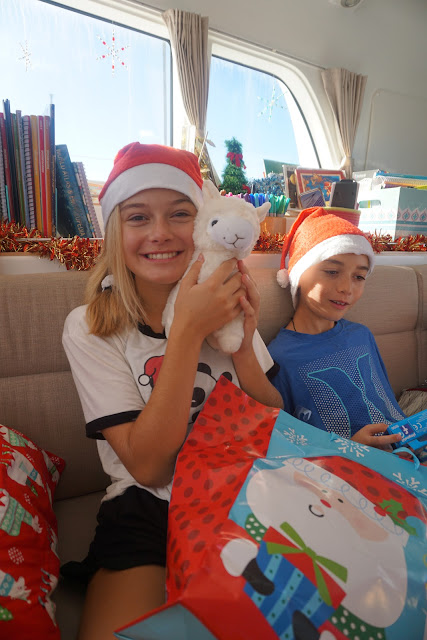 The excitement does not end on Christmas Day. On the 26th we had friends arrive from Texas to visit through the new year. You meet some amazing people out here cruising and we were lucky to meet the SAVA crew last year in the Bahamas. After last season they cruised back to Florida, sold their boat, traveled all over Asia and they are now back in the states looking for the next boat to take to the Pacific. They would be our first guests this season and the kids were ecstatic!! We decide to take them sailing around Martinique from the south all of the way up to St. Pierre in the north part of the island. We did a lot of snorkeling, Monopoly, paddleboard rides, Monopoly, eating, Monopoly, paddleboard rides, Monopoly, swimming. The kids played their new Monopoly game every day for hours!  We stopped in several different anchorages along the way. Some we only stayed at for a few hours and some we stayed at for a few days. Victoria is great with taking pictures so we have A LOT!! She also did a great job taking scenic pictures of Martinique. Lots of pictures to see what happens at Camp SandStar!  Enjoy!! 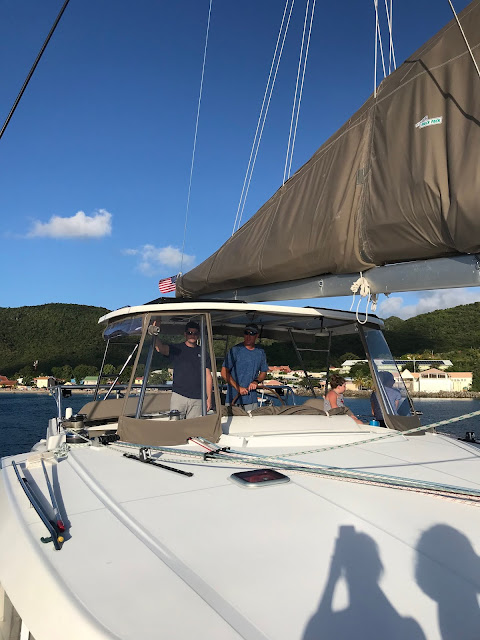 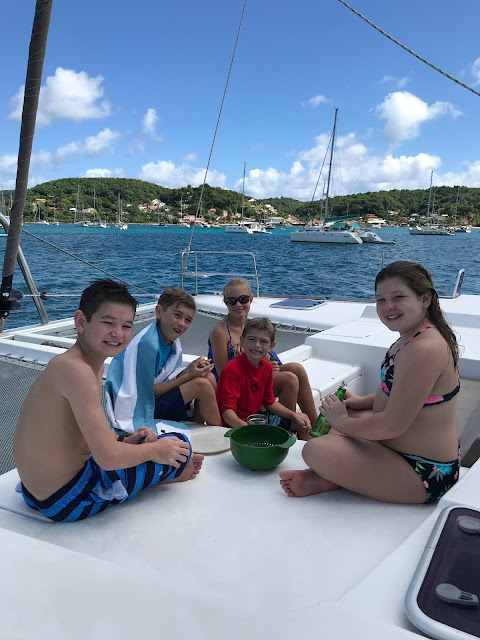 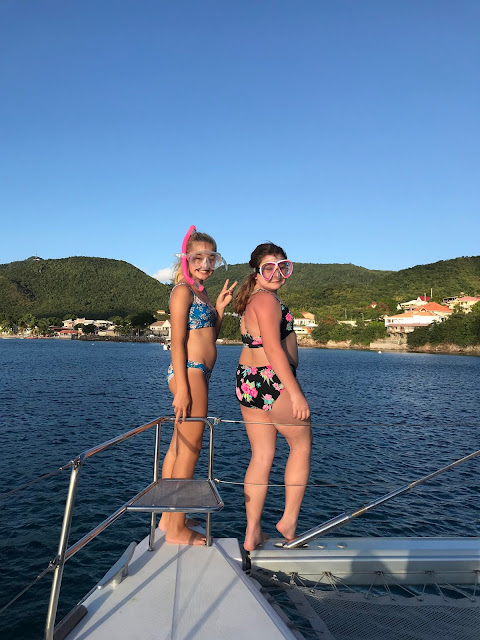 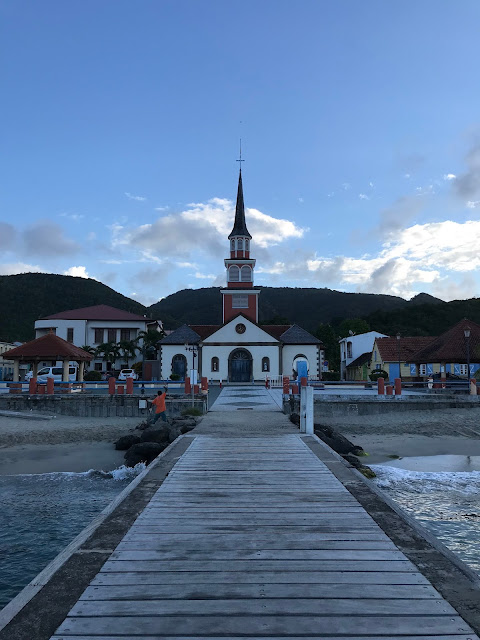 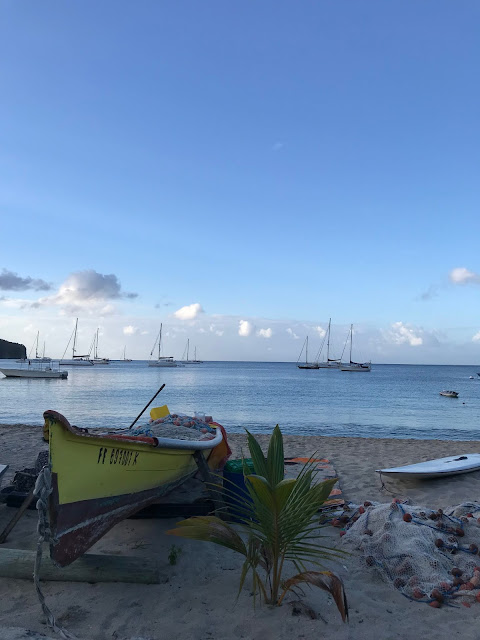 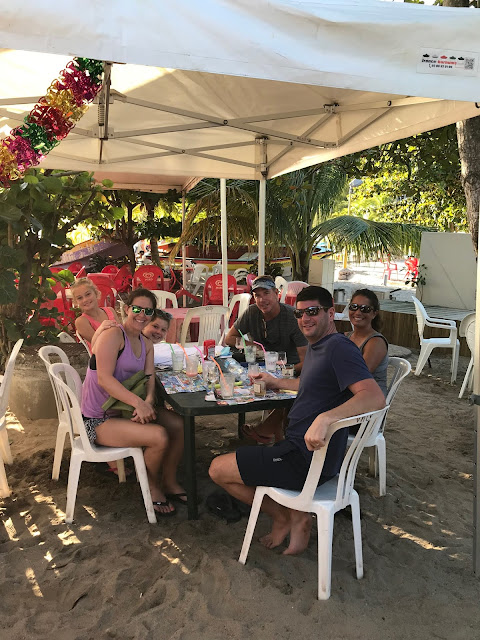 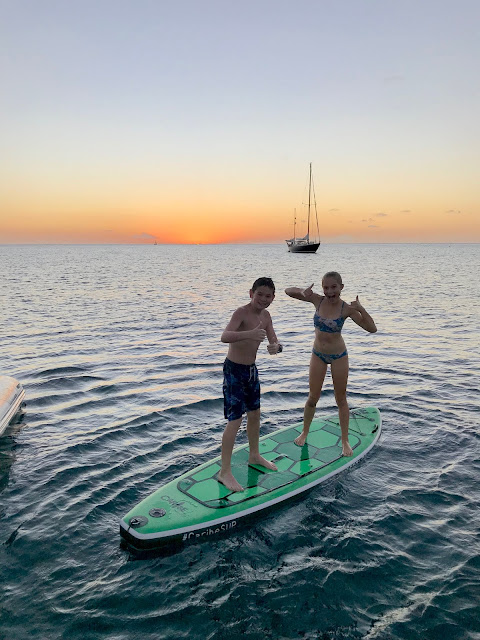 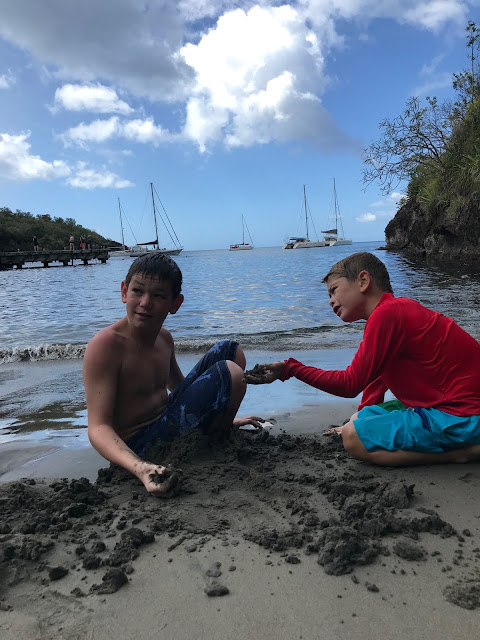 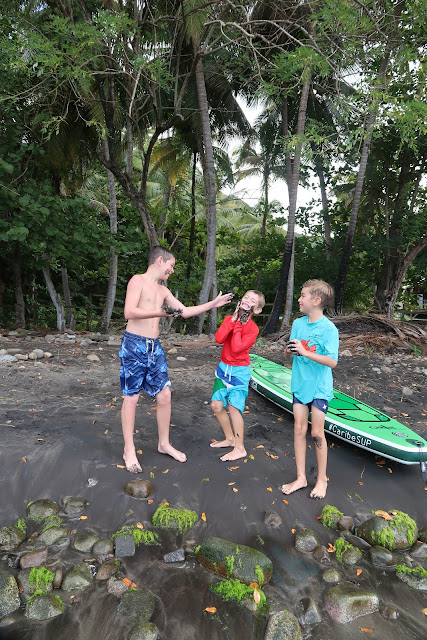 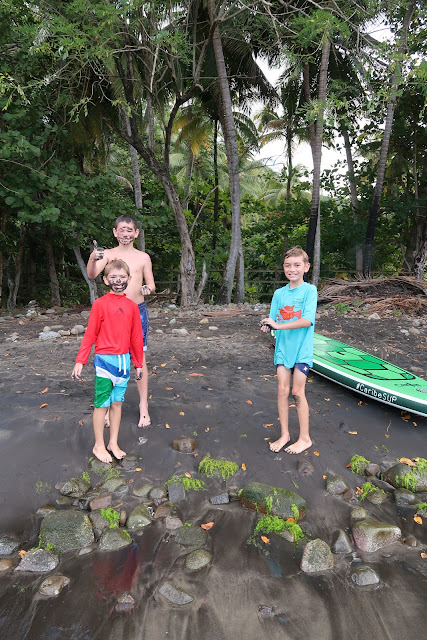 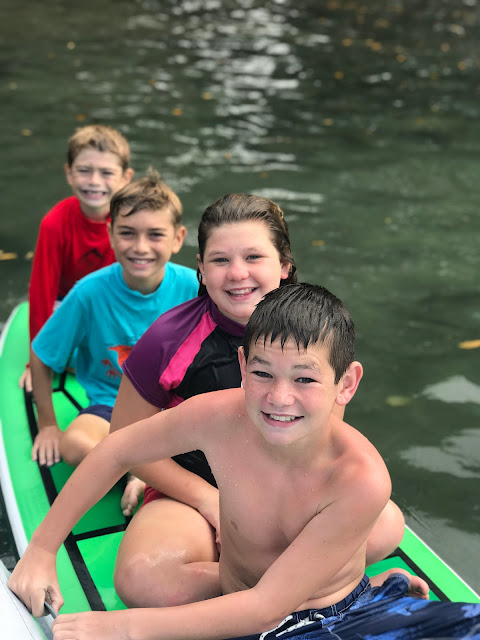 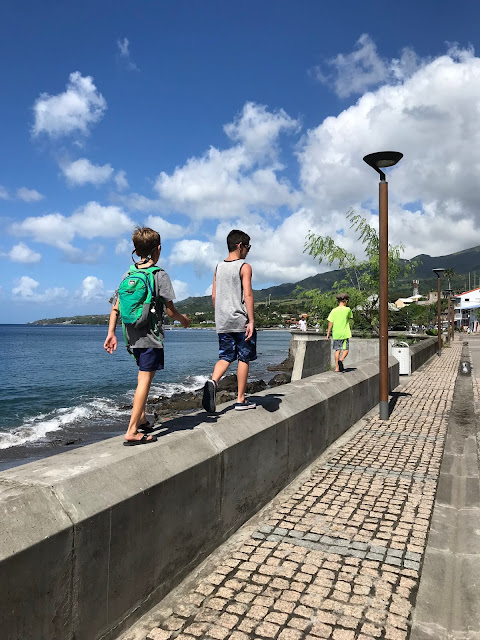 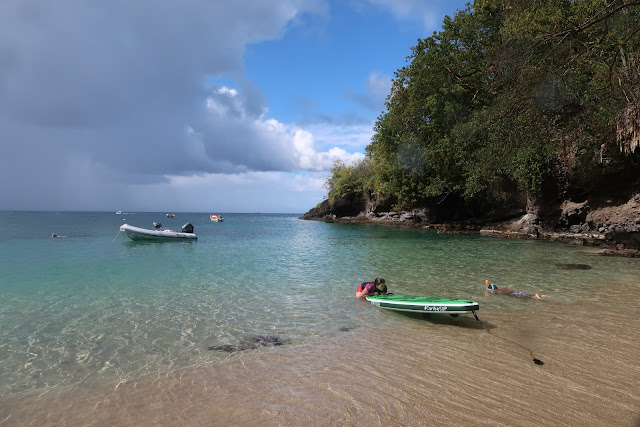 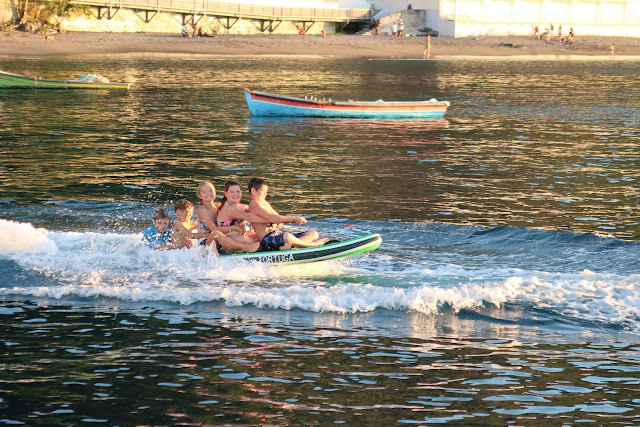