Bequia - A Little Gem in the Caribbean 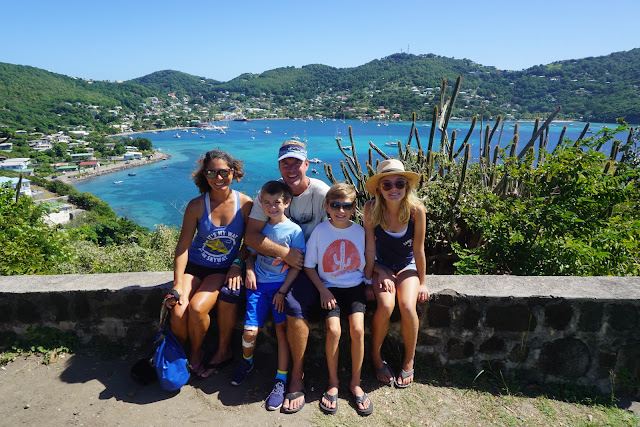 Most of our cruising has been to places we have known about for a while or have at least heard about – Bahamas, Grenada, Tobago Cays. After leaving the Tobago Cays we were on our way to another island in the Grenadines called – Bequia. We knew NOTHING about this island. Quite honestly we did  not even know it existed until we started mapping out our plan up to Martinique. As soon as we anchored in the harbor we were blown away with Bequia’s beauty.    Once we dinghied to shore we were even more amazed by this little gem in the Caribbean.

We arrived in Bequia after a beautiful sail from the Tobago Cays. We were trying to fish on our way to Bequia and made a detour to follow some unrest on the surface of the water that we thought was a bunch of fish. It turns out it wasn’t fish to catch but it was a HUGE pod of dolphins. These creatures are just amazing and we haven’t seen very many since leaving Florida and the Bahamas. The kids watched them from the bow of the boat and I swear they were playing with the kids. They would swim by and look right at them and then jump in the air next to the boat. They would circle around again and only look at the kids by turning their head to the side and then jump again. Every time we encounter these animals we are reminded of their intelligence.

Once arriving in Bequia we were very excited to see what the land had to offer. We could tell from the water that the buildings were very cute and colorful and there were dinghy docks everywhere!! A great way for an island to make a cruiser feel welcome is to have a great dinghy dock. It is like a nice welcome mat to their island. Once we walked the seashore sidewalk into town we were greeted by little gingerbread house buildings, cool restaurants, a beautiful church, and lots and lots of veggie stands.


Bequia is also known for catching and selling lobsters. On our first night in town we found out that the fish processing plant on the other side of the island will sell lobsters, fish, and bags of lobster meat. We just needed to take a bus over to the plant. I set off on a field trip the next day with Annick from SV SunSplash to find this processing plant. Once we arrived we saw tubs and tubs of lobster. You could buy them from the plant or from Sandra who sells them just outside of the gate. We filled our bags and came back to the boat reading to eat. About a week later Dan and I decided to make another trip over to the land of lobster to stock the freezer with lobster tails for our company that would be visiting after Christmas and in January.


There is a great cruisers net here in Bequia that is hosted by the ladies at the Fig Tree restaurant Monday through Saturday on the VHF radio. The island has tons of services for cruisers. This is another way an island can make you feel welcome. They have pick up and drop off laundry service at your boat, ice and water delivery, several fishermen stop by to sell fish and lobster and lots of happy hour specials at the restaurants. While listening to the cruisers net we found out the Fig Tree also hosts a kids reading group on Saturday afternoons. They have been doing this for over 10 years. All kids are welcome and they love to have volunteers. This would be a family event for the SandStar crew. We showed up at the restaurant on Saturday with the crews from SV Wasabi and SV Izula not really knowing what to expect. We were greeted with a welcome hug from Cheryl Johnson who runs the reading group and the kids were invited to look at the bins of books that were separated by age group. The kids then divided into groups based on age and they were assigned an adult volunteer. There was a good mix of local kids and cruiser kids.  Then they were told to pick out a book as a group and start taking turns reading it aloud. After a while they were told to stop and Cheryl passed out paper and crayons. They were then told to draw a picture based on the story that they read. We were still just following Cheryl instructions without knowing what would be next on the agenda. After the kids had time to draw she called everyone over to the big table and introductions were made as big group and then each group went up into the front and presented their story and their drawings. We packed so much into the two hours on this December afternoon. But wait….that is not all….. the kitchen door opens and out comes homemade banana bread and lime squash for the entire reading group. At the end more hugs were given and we left with huge smiles on our faces.

We have been gone from Grenada for a few weeks and it has been about a month since we did our last hash/hike. We were getting restless for another good hike. The Izula crew told us about a hike that you can get to by bus called Peggy’s Rock. Why is it called Peggy’s Rock? We have no idea but we took the bus and followed some pretty crazy directions such as looking for utility poles to turn at, making sure you pass a hidden house, follow the white fence. Eventually we made it to the marked part of the trail and started our assent. The views were breathtaking and eventually we ended up at Peggy’s Rock and the final view was of the harbor where SandStar was anchored. 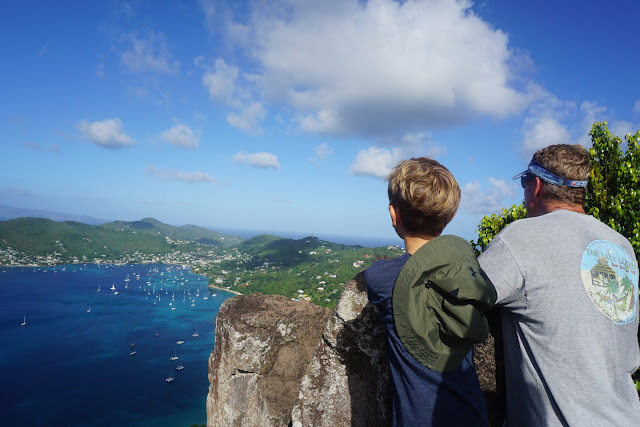 The cool landmarks in Bequia does not stop there. We had heard there was a really cool snorkel at a place called Moonhole. Was a Moonhole a town, a building, a harbor?  It turns out it is a quirky eco-resort that started in 1964 by a couple from the United States. The original building was built from whalebones, driftwood and shells using drawings from the founder, Tom Johnston. It was built just below a huge rock arch that is known as “Moonhole”. Eventually the resort was comprised of 17 houses, a commissary and an office. They did not have running water or electricity.  Once you arrived you really didn’t leave the until your vacation was over. It is also said that you had to be careful in the kitchen because there was a chance you might fall off the cliff. The buildings were definitely built into the land. The resort is still open today but the buildings have been rebuilt on another part of the property because the original house  was eventually deemed unsafe when a rocks started falling on the roof during a period of neglect after Johnston passed away.  You can only get to the original Moonhole house by dinghy. We actually tried to go by land but could not even get close to the buildings. One morning we decided to head over there with SV Izula and SV Wasabi to snorkel and to see if we could check out some of the abandoned buildings. The snorkeling was very cool and before we knew it we were ready to make our approach to the buildings. We had to time our steps up to the land with the waves that were crashing into the rocks. Once we were on land it was really eerie walking around this unique piece of property. After we explored the buildings we had to make our entrance back into to the water by timing the waves again as we jumped in and swam away.  Since we swam there I didn’t have my camera but was able to take a few pictures once we got back onto the dinghy. 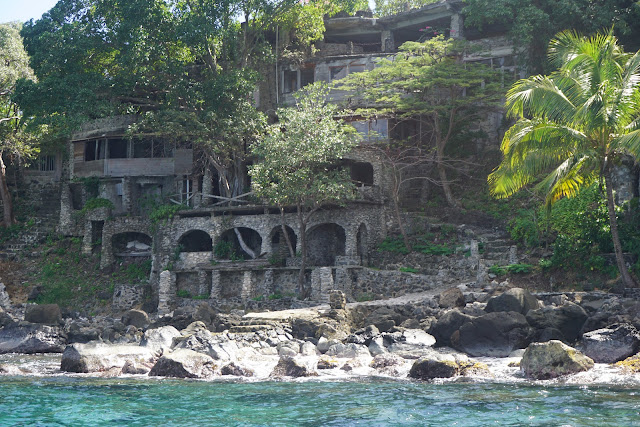 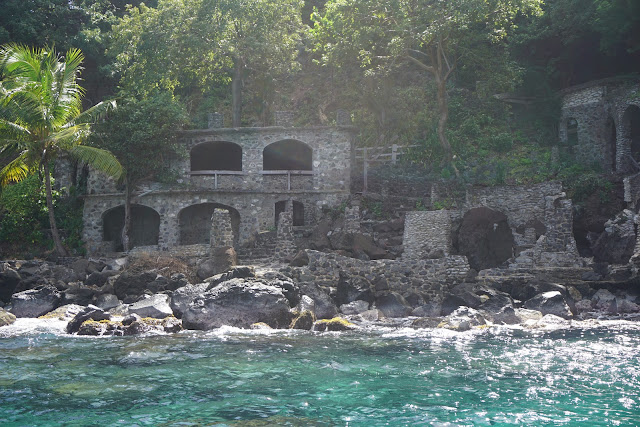 We took a day to tour an island in one of their signature open air truck taxis. We visited the fort, a turtle sanctuary and the very northern tip of the island. 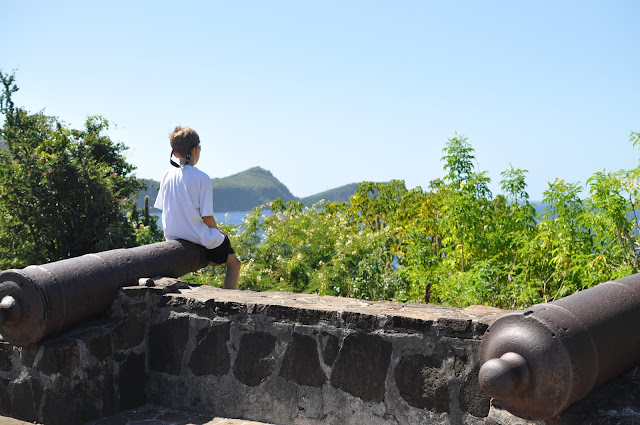 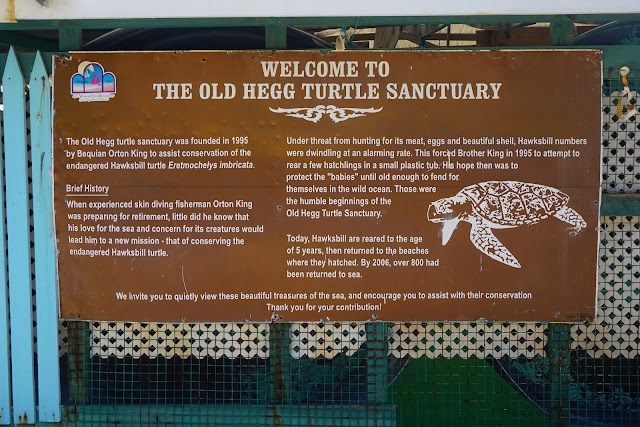 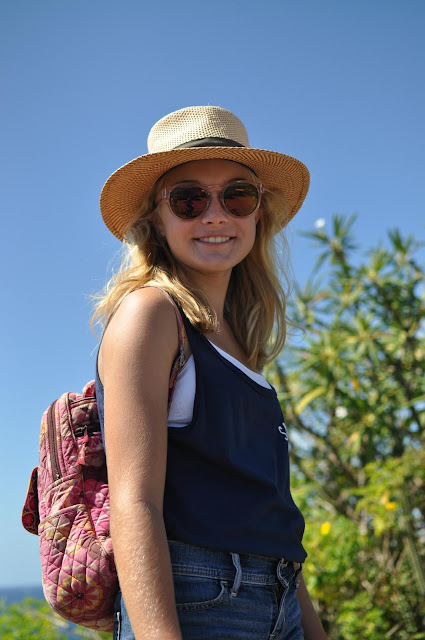 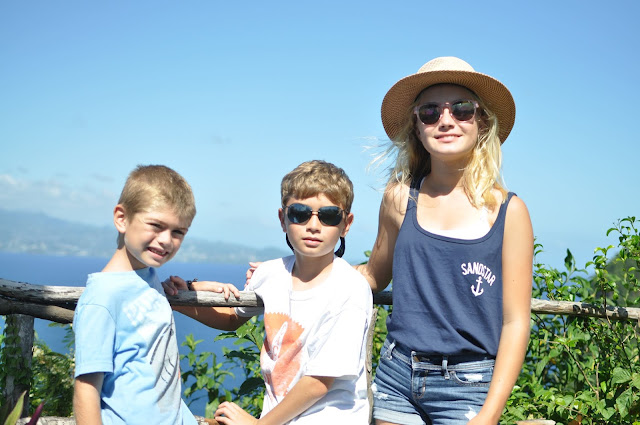 Christmas is in the air in Bequia and we were there to kick off their holiday celebration that starts 9 days before Christmas. The locals spent over a week decorating the downtown and a big stage. There was lots of lights, music, and food to kick off the festivities.

Speaking of Christmas….we decided to boogie up to Martinique to do some Christmas shopping and celebrate the holidays. We also found out we would be getting some visitors the day after Christmas so there was a lot of excitement in the air!