Something Smells Fishy Around Here!! 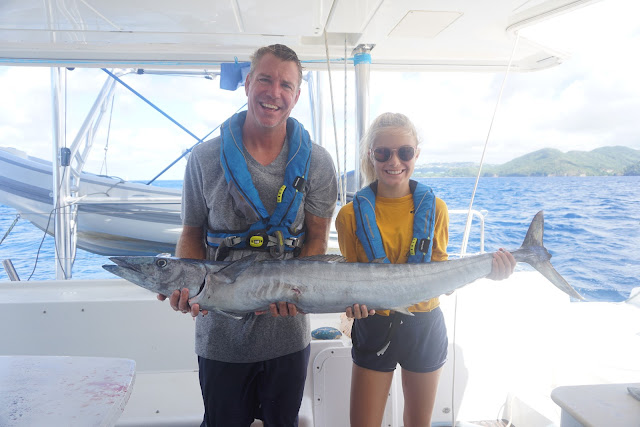 By Kathy
Actual Dates: January 3rd – January 11th
Happy 2019!! We decided to start this year off with a nautical U-turn. After lots of hugs and good-byes to the SAVA crew we headed south. On our way to Martinique we just had a small glimpse of St. Lucia for one night. Now it is time to head back and check it out and if we are lucky we might catch another fish.
We had a nice, comfortable, fast sail to St. Lucia on January 3rd as we headed toward Marigot Bay. There was a rumor this bay had mooring balls and if you were moored you could use the resort pool and hot showers. The kids were super excited! As we were approaching Marigot we started the engines so we could drop the sails. Right as I was walking into the saloon to turn the engines on we heard the fishing line go nuts -ZING! Whatever was on the line was running fast!!! We quickly started the engines and got everything set to reel the fish. Dan and Sam started the process of reeling in the fish and we were shocked to see another WAHOO!!! To bring in a fish of this size I had to take reel and Dan had to get the gaff ready. Since we were bringing in the fish on the starboard side of our boat the boys had the job of removing the cushions to slide the fish over the couch area. So who is driving the boat when all of this is happening??? Emma was driving. Yes, the 13 year old has the helm! This was a true all family effort. 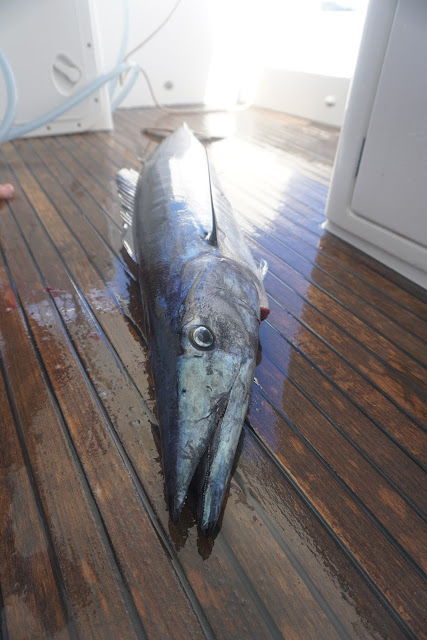 Once we got the fish on the boat we were amazed at the size. This one was a lot bigger than the last wahoo! After lots of pictures and high fives we headed into Marigot.
Now what to do with this fish??? Well you have to rally the troops for some fish parties. Our friends on Soulstice were in the Pitons and they said they would be up the next day to share the feast. We also contacted new friends that we had made just a few days before in St. Pierre on a boat named Starship Friendship. They stopped by our boat in St. Pierre and introduced themselves because they saw that we were from St. Pete and they were too! It is such a small world sometimes. They happened to be heading into Marigot and were happy to come over for dinner.
I know I have said this before but I have to say it again – you never know who you will learn from out here. I think that everyone has something to teach you! The crew from Starship Friendship arrived and asked if they could take over prepping for dinner. Absolutely! We found out they are big into fishing and spearfishing and knew a lot of about fileting wahoo and making sushi. WHAT??? We did not even know you could eat wahoo as sushi. The first lesson they taught us was how to filet the fish. We had actually cut the fish into steaks but they explained how to filet it into four loins. Sean, Annie and Dave helped take our steak cuts and turn them into sushi. Kelly show me how to make those funny little rice balls that go under your sushi. I have eaten sushi lots of times but never knew how to make it. We had an amazing dinner of sushi and grilled wahoo. Wahoo sushi is some of the best! We were shocked!  In the back of my head I thought,  I hope we remember what they said about fileting the wahoo the next time we catch one…who knows when that will be.

The next day it was time to head to the pool and it was one of those resort pools that makes you go, WOW! There was a swim up bar and lots of comfy beds and lounge chairs. Our friends on Soulstice were due to arrive in the afternoon. After they arrived they decided to go out for a little fishing trip on SandStar for a couple of hours to see if we could find another wahoo. Catching a wahoo was one of Brooke’s New Year’s resolutions. The kids were not leaving the pool so I stayed with them while Dan, Brooke and Barrett went out for their quick fishing trip.

The fishing crew returned a few hours later and Dan dinghied over to get us at the pool. On the way back to the boat we asked if they had any luck and he said “not really, just a couple of fish”. The joke was definitely on me and the kids because when we got to the boat we found TWO huge wahoo!! I couldn’t believe it!! There was lots of excitement and picture taking and we were happy we could put our new filet lessons to good use. We had lots of fish to eat! Brooke offered to teach us how to roll sushi rolls. Again, we have eaten many rolls but never knew how to make them. It was an event that night at dinner. We passed around the roller, rice, veggies, fish, and rum punch (for the adults) and everyone had a chance to make their own roll. 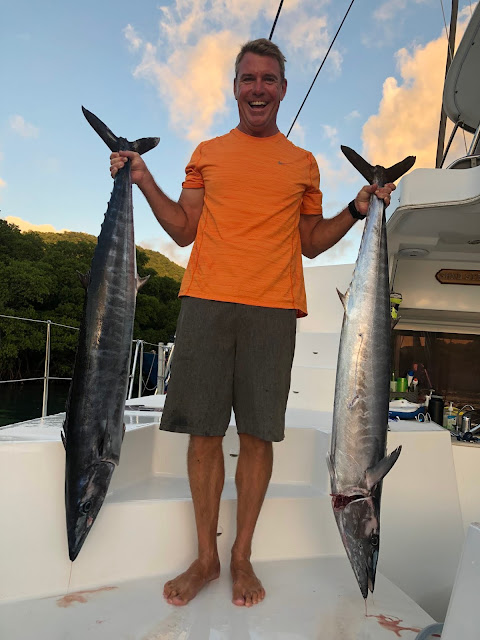 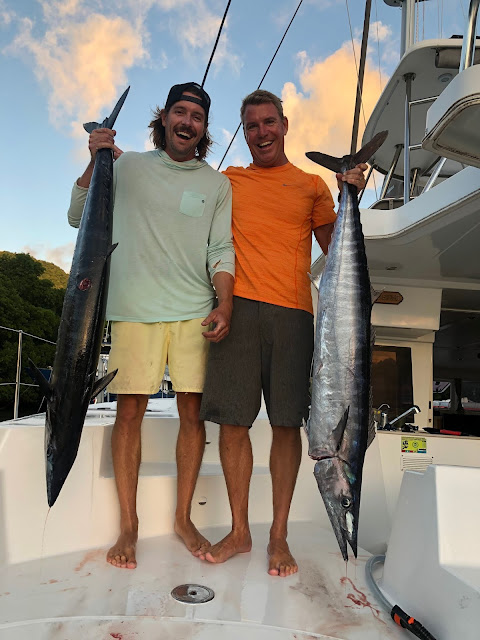 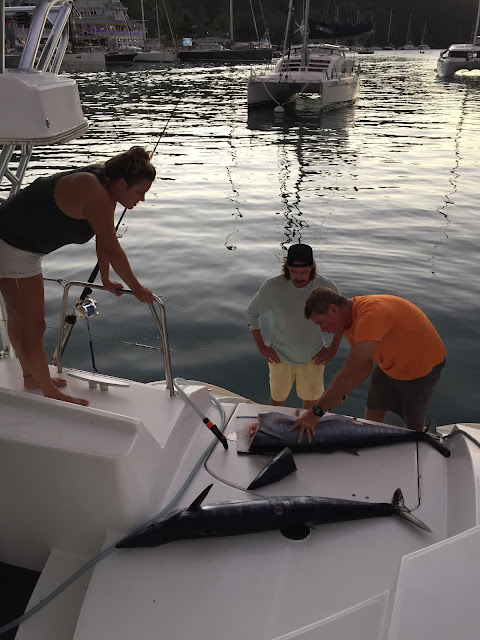 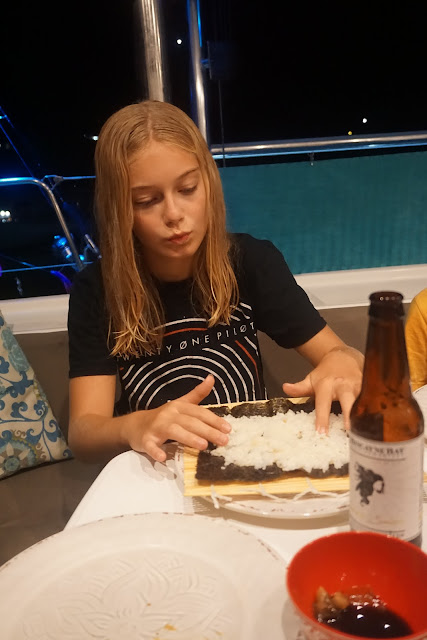 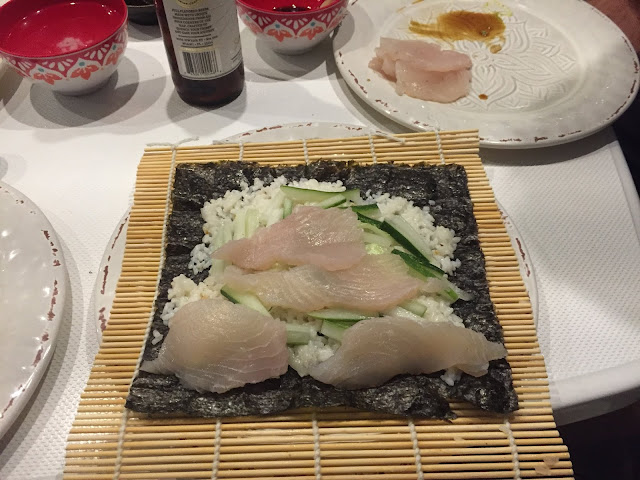 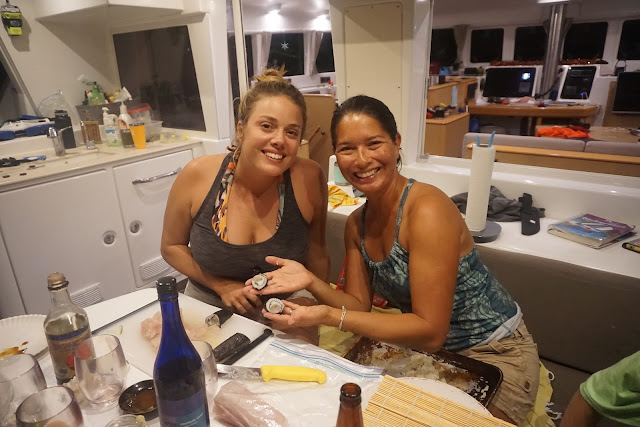 Brooke and Barrett came to help us eat the first wahoo now we have two more. It is time to call in more friends. The Frenchie Crew was in Martinique and said they would head our way the next day! The Frenchie Crew arrived that afternoon with some excitement when they lost their engine on the approach to the bay. We dinghied out with Soulstice to see if we could help but have no fear Captain Katie had it all under control. Berry even offered us a drink while Katie was changing the impeller on the engine. With Frenchie rafted up to Soulstice in the bay it was time to have some fun!!
Before we met Brooke and Barrett on Soulstice we had heard about Brooke’s mad cooking skills from other friends. So when we had all of this fish Dan and I would kid around when we talked about different ways to cook it and say  - WWBD - What Would Brooke Do? Well, we were so excited to find out. The next day we had dinner planned on Soulstice. The Frenchie Crew made some amazing grilled okra. Yes, you read that right, okra. Those slimy green vegetables that you find in gumbo in the southern US. It turns out that they are delicious on the grill. The Frenchie kids then went to bed and the Sandstar kids were on our boat having a movie night.  So what did she cook? She made furikake crusted wahoo with a soy glaze, coconut rice, a salad with homemade ginger dressing, and wahoo sashimi. To say this was amazing is an understatement – It was unbelievable!! The Frenchie and Sandstar crew have been calling this “The Dinner” all year long. Don’t forget, she created this amazing dinner in a boat kitchen! It is a tiny kitchen compared to what most people are use too.  I did have to ask a few more questions about  furikake. It was so good and I had never had anything like it. Furikake is a rice seasoning made primarily of little flakes of seaweed and sesame seeds. It was delicious. This will be added to our list of items needed on SandStar along with a sushi mat. 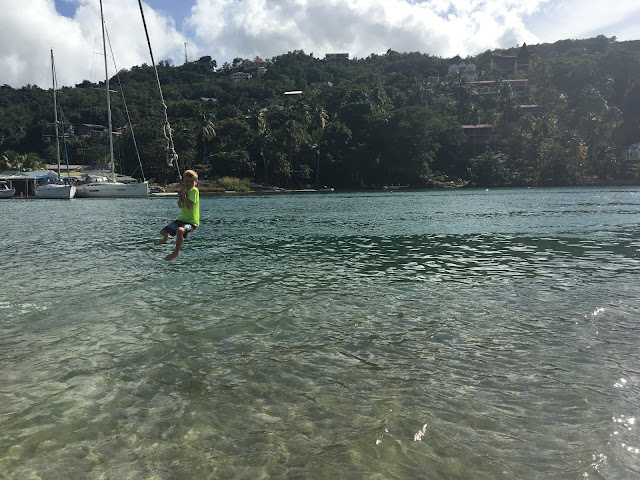 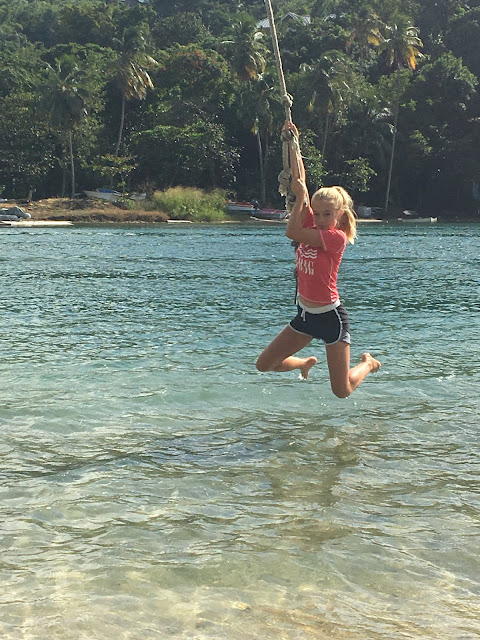 After a few days in Marigot we decided to go to the Pitons anchorage before heading back to Martinique. Since we would be there for a few days and it was pretty windy we took a little land trip to the volcanic sulfur springs to play in the mud followed by a delicious roti lunch at a local restaurant in Soufriere. 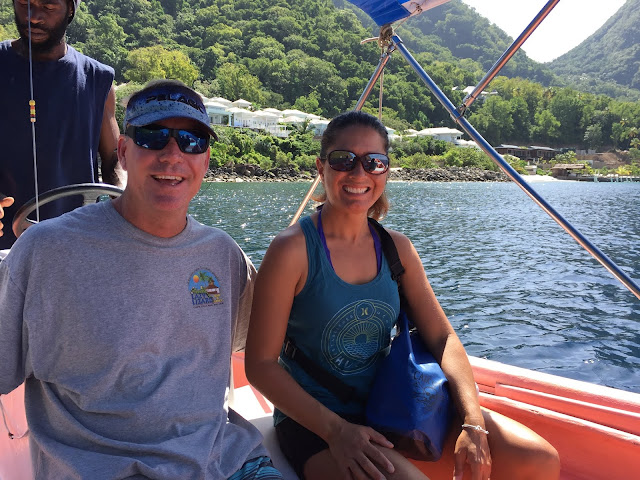 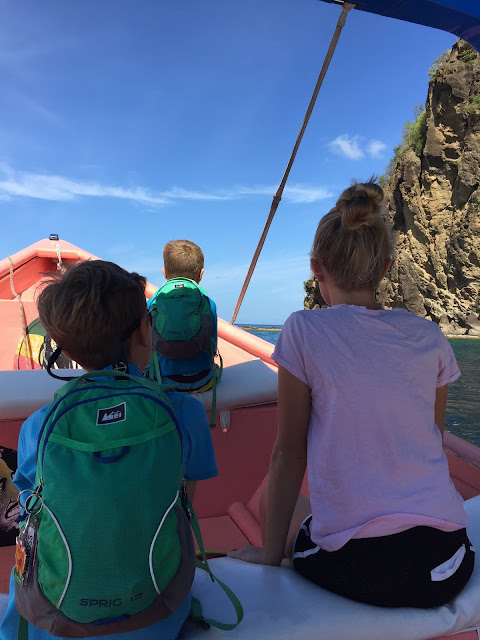 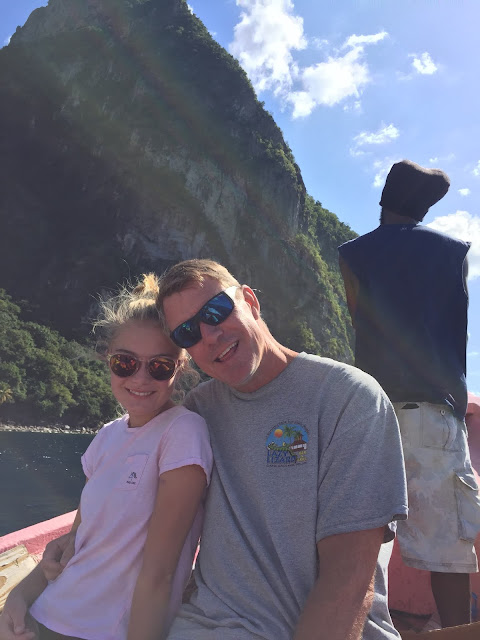 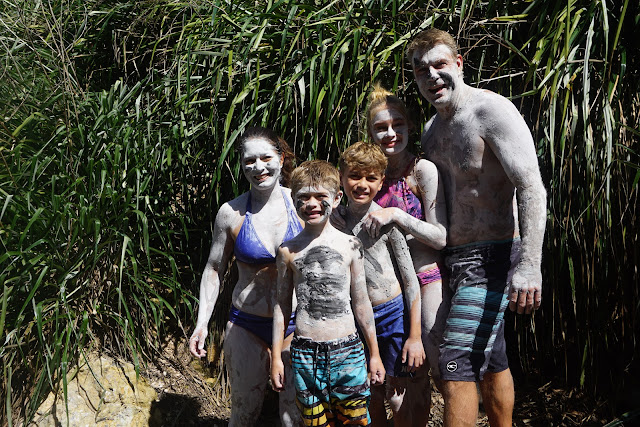 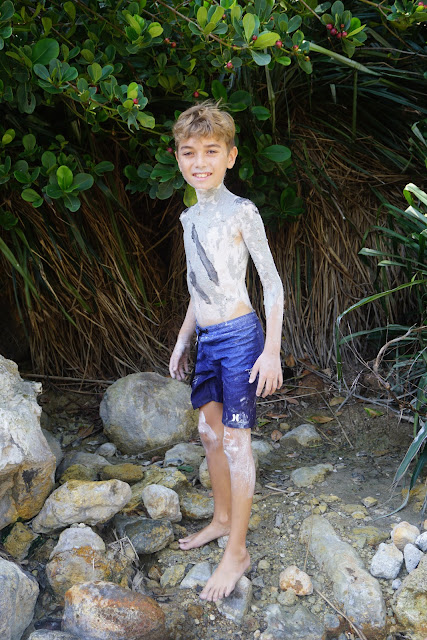 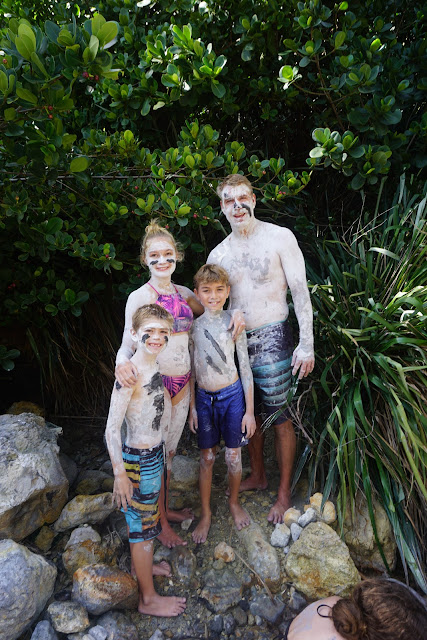 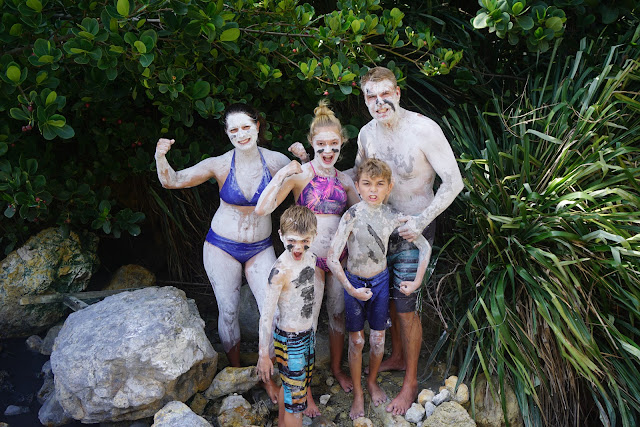 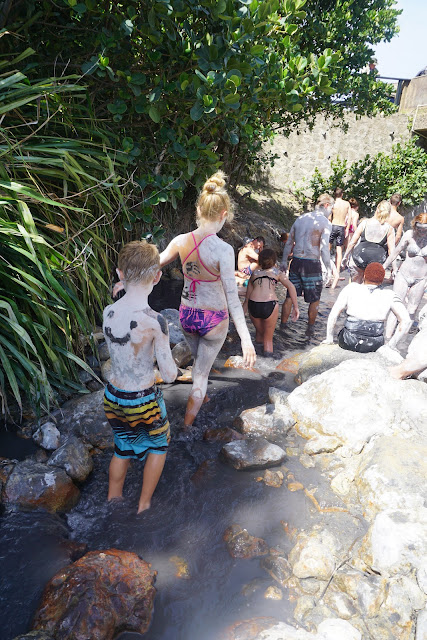 The next day Dan took a hike up the Petit Piton with Barrett from Soulstice and Berry from Frenchie. This was the less popular hike between the two pitons due to vertical trail up the piton. They had a local guide and you can tell from the pictures it was very vertical with lots of ropes and some great views. 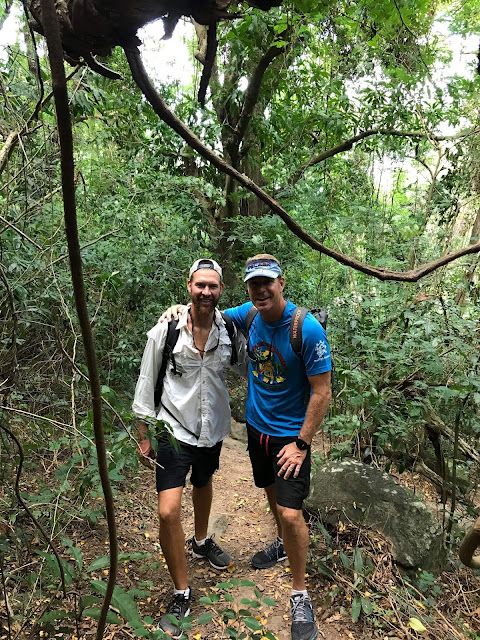 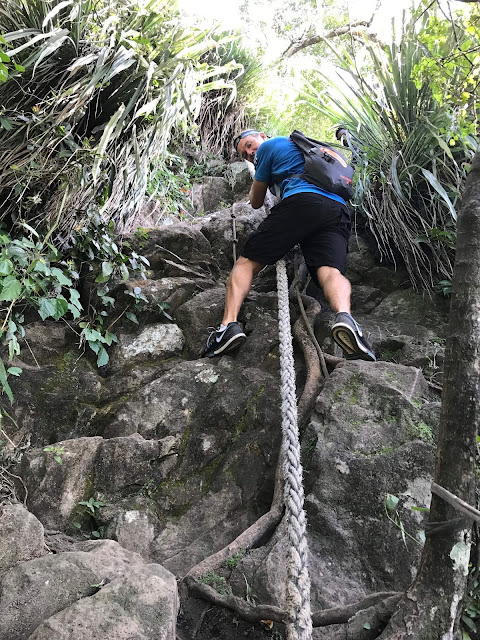 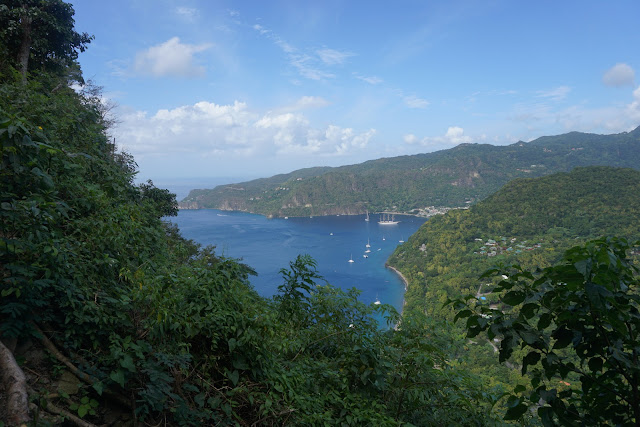 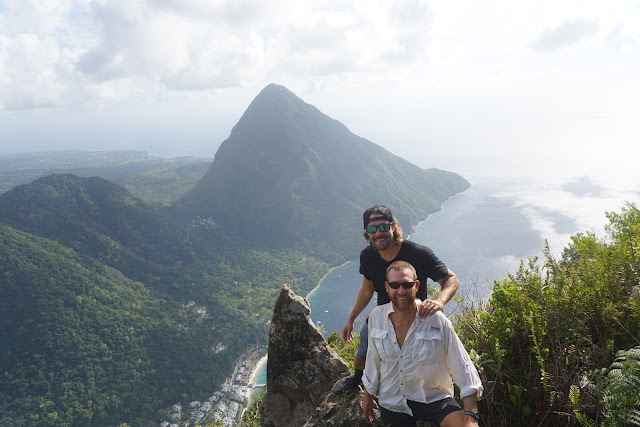 It is time now to head back north to Martinique to meet up with Dan’s parents and explore the island.
- July 16, 2019