By Kathy
After two months of hanging out in George Town we decided to go on a field trip over to Long Island for a few days. We have moved around George Town but only to make the very short trek from Sand Dollar Beach to Monument and maybe stopping at the Volleyball Beach in the middle.  It was a good opportunity to check all of our systems and the repairs we had made in George Town – new alternator, sail drives, etc…  We also really needed to get out and move around a little bit ourselves.
Long Island is just 32nm away from George Town. We were guessing it would take about 5 hours to make it over to Salt Pond. We were right on our time estimate but we were beating directly into the wind so it was bumpy on the way over. Everyone was fine and we are very happy to report nobody got sick. Yeah!!
We were looking forward to eating at a few of the restaurants we had heard about from other cruisers. The first one we were going to try was Tiny’s Hurricane Hole. It is a small thatched roof beach bar that is part of a two cottage resort. It was destroyed in Hurricane Joaquin so it had been completely remodeled by the new owner Michelle (aka Tiny). It is located right on the water in the Salt Pond area so as soon as we got cell coverage again we looked up the menu. It is really common in the island restaurants to make reservations for dinner. But the reservation is not necessarily for a table because it is so crowded but for the kitchen to know that you are coming so they can stay open and make sure they have the supplies needed for your dinner. I am happy we looked it up because low and behold they had pizza on the menu BUT you had to call ahead so they could make the dough by scratch! We are always on the hunt for good pizza which is hard to come by in the islands. We anchored in the bay right at sunset and immediately jumped in the dinghy to head over to Tiny’s. We arrive to the restaurant in the dark, anchored the dinghy, and made the short walk to shore. But as we are walking through the water I got stung by a jellyfish. OUCH!!! I have never been stung before. It was shocking and it hurt! There wasn’t much I could do at that moment except order one of Tiny’s island special rum drinks made with local sour oranges. That helped a lot! Tiny was a pleasure to talk to and the pizza and homemade key lime pie was exceptional!! It was a great first meal in Long Island!
As you can imagine from the name, Long Island is a very long skinny island. The best way to see it is with a car so the next morning we called the rental car company. There is really only one rental company to call near Salt Pond. The company is owned by a couple and they run the business out of their home right by the dinghy dock. By 10am we had wheels for the day! Long Island might be small but there are some big things to see on the island. We had been reading the Bahamas Cruising guide as we made our way through the islands and on the very front page of the Exuma section was a beautiful picture of the Hamilton Caves so that was very high on the list to see. We also wanted to see Dean’s Blue Hole so that was also on the list. There is really only one road going north and south so you can’t get lost. We headed south first and then turned around after lunch and headed north.
Here are the highlights:
Dean’s Blue Hole
Dean’s Blue Hole is just stunning! It is a swimming hole that is 600 feet deep. It is known worldwide as a spot for free diving competitions. There is a pretty cliff area surrounding one side of the hole that makes it a nice cliff jumping spot. Dan and Sam decided to see how high it really was up at the top.
Here is a video of Dan and Sam jumping off of the cliff! 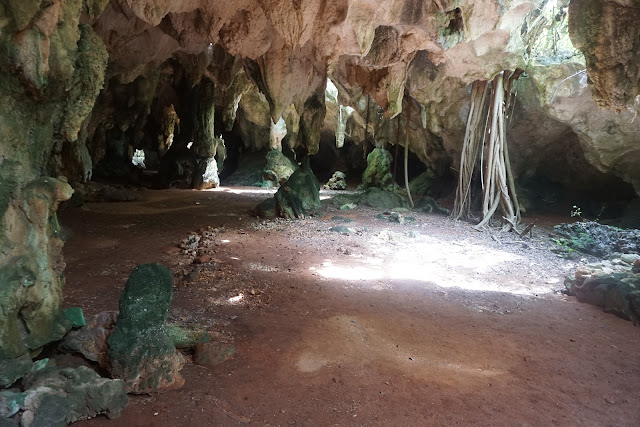 This was a spot I have been excited to see for many months.  We didn’t realize until we arrived that the caves are owned by the Cartwright family and in order to see them you have to visit Leonard Cartwright and he will take you on a tour of the caves. You had to know what settlement to look for the sign to Leonard’s office and make sure you do not miss it. There was not a flashy billboard or big advertising. It is just something you learned by asking. This is very different from attractions in the states. We had to come back a few times to his office until he returned. Once we found him we followed him to the start of the caves, drowned ourselves in bug spray, got our flashlights ready and we were set to go. We were very lucky to have the tour all to ourselves. You can tell from the beginning of the tour that Leonard loves these caves and is very proud of them. He makes sure that anybody that visits does not disturb the beauty of the caves and he takes great care of the them. During the tour he had many stories about playing hide and go seek in the caves with his cousins and what a challenge that game can be in a cave system. We saw a few different kinds of bats and some land crabs. Leonard also explained that before hurricane shelters were built on the island the caves were used as a shelter for the people in the settlement during a storm. Most of the cave system was dark so the only places our pictures turned out was where there were holes in the ceiling created by the ocean.


We did get a little video with some bats!
Columbus Monument
In 1492 Columbus sailed the ocean blue and landed in……THE BAHAMAS!
I guess this is something I didn’t realize but going back and reading the Columbus poem we all learned in school it says it right there! Long Island was said to be the third island he discovered and it is said he thought it was the most beautiful island. The people of Long Island built a monument to commemorate Columbus’ discovery on the highest point on the island with an amazing view from the top. To get there you have to first find the small sign that says “Columbus Monument”. Again there is no fanfare in island attractions. Then you take the treacherous three mile drive to the base of the hill where the monument sits. At times during the three mile drive we really didn’t think our little rental car would make it but we made it and we were so happy we didn’t turn around! The monument is located at the tip of Long island so after climbing to the top of the hill to the monument we were treated to a spectacular view of the island and ocean. 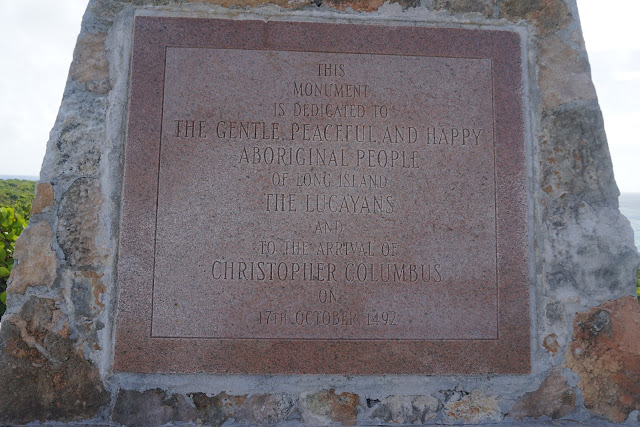 Erna’s Natural Pool
After making the drive back from the monument we realized our day with the rental car was coming to an end but we wanted to fit one more stop in before sunset. Our friends on SV SAVA had told us about a really cool natural pool at the Stella Maris Yacht Club. We made our way to the ocean side resort and it was like taking a step back in time with older bungalows spread out on the property. With the help of some German guests we found the boardwalk that lead to Erna’s Natural Pool. Erna’s Pool is ocean fed pool that is carved out of the rock. The kids were amazed by the rock pool. We had a few minutes to enjoy the pool before heading back towards the boat before sunset.
We loved our time in Long Island and so happy we made the trip over. On the way back to George Town we were actually going with the wind and we were able to sail most of the way back without the engines. It was peaceful and really relaxing.
Now back to George Town to get the boat ready for the trip to Grenada!!
- June 02, 2018