This is flashback post from our trip down the Exumas. We stopped at Staniel Cay, Black Point and Little Farmer’s Cay.

Staniel Cay
We arrived in the afternoon at Staniel Cay and we were greeted by about 20 mega yachts!! They were huge. A lot of them had big inflatable slides from the top with lots of water toys attached like boats and wave runners. We anchored just off of Big Majors (aka pig beach) so we saw our little curly tailed friends right away. People come from all around the world to see these pigs.

They are cool but the best thing about Staniel Cay was the Thunderball Grotto. It was a cave you could swim into and it was beautiful. Lots of fish and also very popular with the tour boats so we ran into lots of people. You want to time the tide so you are going in and out at slack tide so there is less current when you are enjoying the grotto. We loved the grotto so much we made sure snorkeled the grotto two days in a row.

We had pretty high hopes for Staniel Cay but it turned out a little different than we expected. The only thing to visit on the island was the yacht club and that was pretty busy with tour boats and not really our speed. There was also a lot of boat traffic from the water toys from the mega yachts so we only stayed two nights in Staniel Cay.

Wow! What a difference in islands. We moved just south of Staniel Cay to the neighboring island of Black Point and we immediately loved the island. It was a true Bahamian out island. There were three restaurants, a laundromat, and a couple of very small grocery stores. When I say small I mean smaller than the convenience stores in the states. When we arrived the mail boat was a few days late so it was slim pickings in the stores and the restaurants had very limited menus.

The one thing we had read about Black Point from other cruisers was that you have to go see Mama. She has the best Bahamian bread in the islands. She is quite famous among the locals and cruisers. We figured out that she is Lorraine’s mama and to get the bread you visit her house which is located behind Lorraine’s Restaurant. When we went to buy bread we were greeted by Mama on her front porch and invited into her home. She has all of her bread lined up on her kitchen counter. We wanted to make some French toast with her bread but remember when I mentioned the mail boat being a few days late….well that meant that there were no eggs to be found in the stores and it has been about 3 weeks since our last visit to a grocery store so our supplies were limited. But Mama was kind enough to give us some of her fresh eggs for breakfast in the morning. We are happy to report that the bread lived up to its promise. It really is the best coconut bread in the Bahamas!!

Black Point is very cruiser friendly. Since there were only three restaurants you learn where to go for happy hour pretty quickly. We found all of the cruisers and the locals returning from work on Staniel at Scorpios for some pretty strong rum punch. We talked to a lot of cruisers and the kids went to the playground and played with the local kids. Sam traded time with his matchbox car for a chance to ride a bike down the street.

The next day was laundry day and this was laundry with a view! After carting all of our laundry from the boat, into the dinghy, out of the dinghy and up the hill we were able to get started. It was a mommy and daughter laundry day and Emma and I read our books, did some homework and ate some conch fritters while we waited. The view of the harbor was amazing.


We had already been to Lorraine’s and had amazing cracked conch and we had been to Scorpios for some yummy rum punch, now it was time to try the third restaurant on the island Deshamon’s. Deshamon’s is known for their pizza and we were ready for a pizza pie. But the catch was that you had to order the pizza early in the day so they could have the dough made and ready for you at night. We had tried to eat there the night before but because of the mail boat being late they did not have the ingredients (flour) for the pizza. We were so happy that the mail boat finally arrived that afternoon. The pizza was great and they even made Jack a special dairy free pizza with the last of the special mozzarella cheese we had on the boat.

Now time for some decisions. There was some weather coming in so we wanted to make it down to George Town before the next front but Lorriane’s was known for their holiday parties and it happened to be St. Patrick’s Day. Big party planned that night at Lorriane’s. We were torn! But we ended up picking up anchor and starting our trek south to Little Farmer’s Cay which would be our last stop before George Town.

We had a beautiful sail down to Little Farmer's on some very calm water on the Exuma Bank (west side of the islands). Not a wave in sight! Everyone did some reading, school work and prepared leprechaun traps. 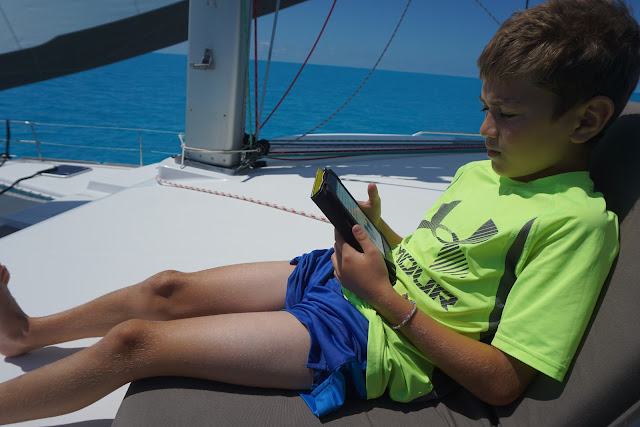 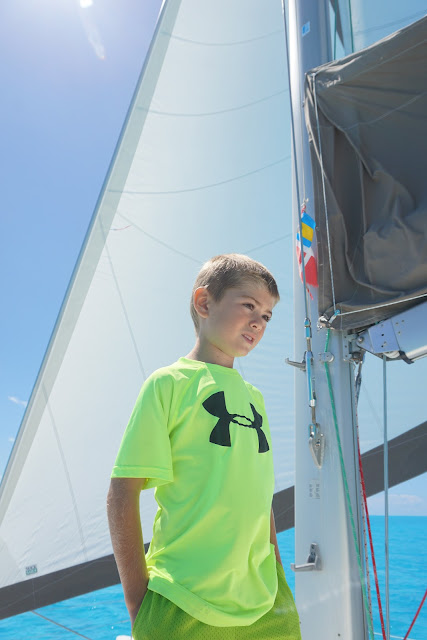 This was a very brief overnight stop for us. We were there for less than 24 hours but we accomplished a lot in our short period of time. What did we accomplish?? We were able to buy about 22lbs of Bahamian lobster!! Dan scouted out the local fish guy – Little Jeff and we bought a huge bag of lobster with HUGE tails! We were amazed. Lobster season was ending in a few weeks and we had a lot of company coming into George Town so we wanted to make sure we had plenty of lobster for everyone. To end our time in Little Farmer’s we ate at Ty’s beach restaurant for a St. Patty’s Day dinner of cracked conch. 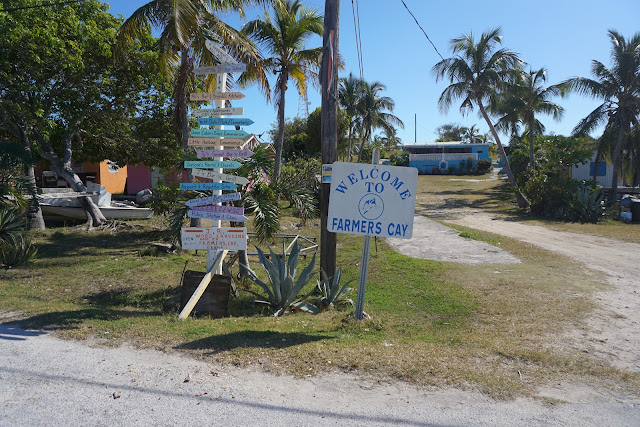