When I looked up the dates for the rest of our Garden Route adventure I was amazed that we saw so much in just a little over a week. This is the part of the trip that we left blank before leaving Grenada and booked everything when we were in Cape Town. We found some very cool lodging such as a tent, a treehouse, an elephant sanctuary, and a small safari camp. We also had a lot of animal encounters. We played with ostriches, monkeys, elephants, giraffes, rhinos, and more….

Africamps – This is our first glamping experience and it was very cool. The tents were very comfortable and was better than some hotels we have stayed in the past.

What did we do in Oudtshoorn?

As we move through South Africa we are amazed at the different climates an terrains the country has to offer. We have seen cool climates in the mountains and vineyards and as we move along to Oudtshoorn we are now in the dry, arid, hot desert. We noticed a change immediately in the weather and it was also hard not to guess what this area is known for as soon as you arrive – Ostriches! There were ostrich farms everywhere! We knew we had to learn more about our feathery friends.

We decided to take a tour of the Highgate Ostrich Farm. We learned so much on how they take care of the ostriches and why they farm them. They can be used for feathers, breeding and food.

Feathers- Ever used a feather duster?? Or make a Thanksgiving craft at school? Chances are you were using ostrich feathers. We had a chance to tour the craft room where employees were making feather dusters, boas, and other things to sell in the gift store.

Eggs – We learned that the food from ostrich egg equals 24 chicken eggs!

Meat – Ostrich is a pretty common meat here in South Africa. You can find it on a lot of menus. One ostrich can provide close to 100lbs of meat.

During the tour we were able to see incubator for the eggs and hold 2 week old baby ostriches that were still in the nursery. Very cool!! 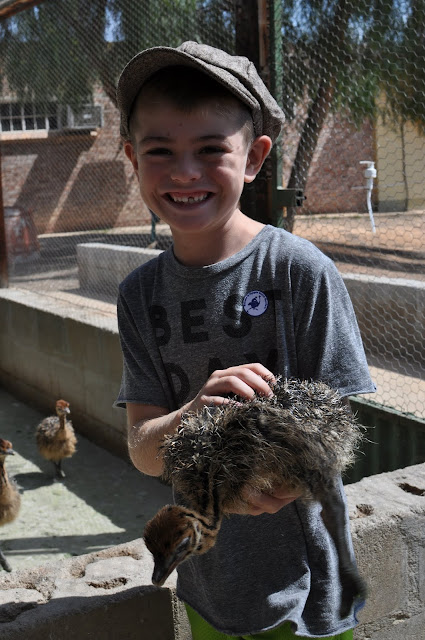 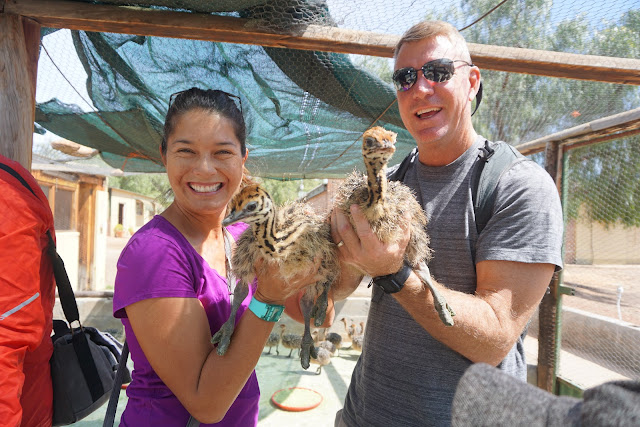 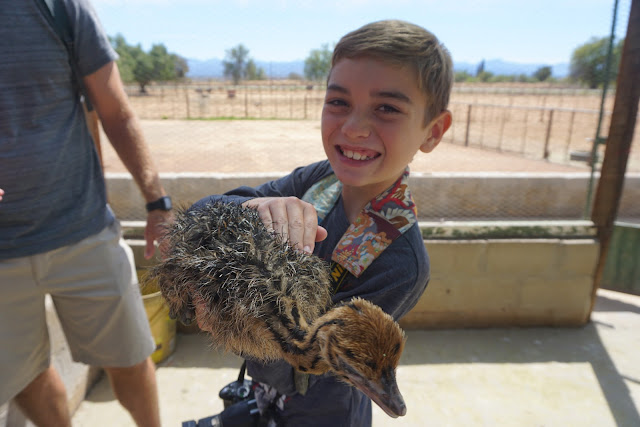 The next part of the tour took place on the other side of the farm. Just a donkey ride away. Yes, you read that right – a donkey ride! We loaded up on the wagon and a pair of donkeys pulled us over to a different area of the farm for our ostrich rides! Something about riding in a wagon pulled by a donkey in the dusty desert on your way to ride a ostrich makes you feel like you are in a different world.

I will tell you that the ostriches were not harmed and the reason you only see 4 of us in the pictures and video is because there was a max weight of 75 kg to ride the ostriches so Dan was our videographer. 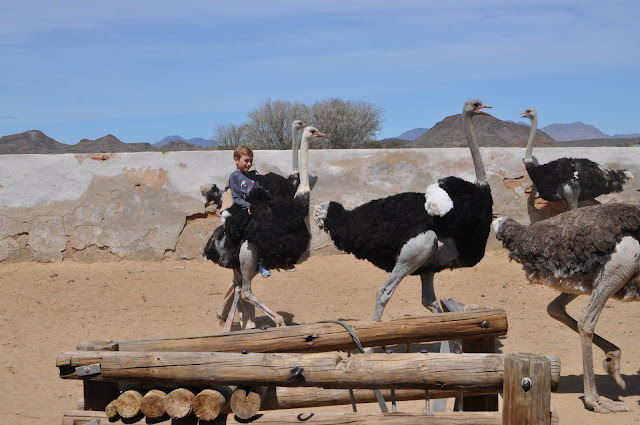 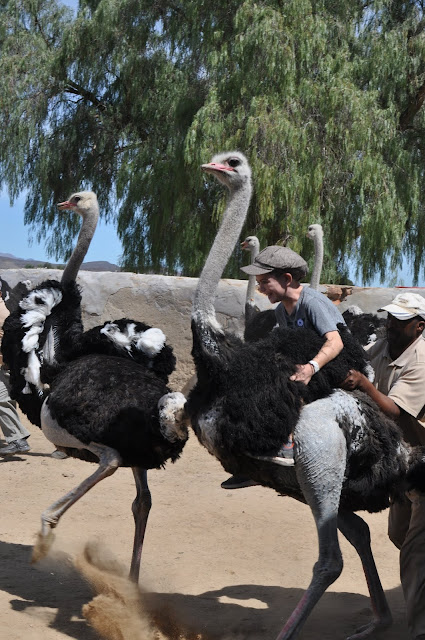 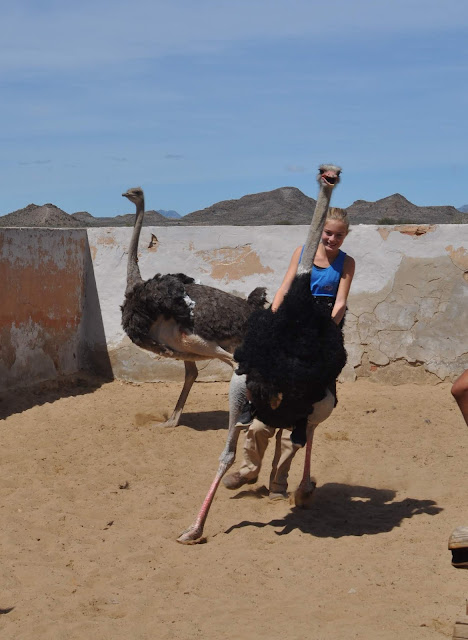 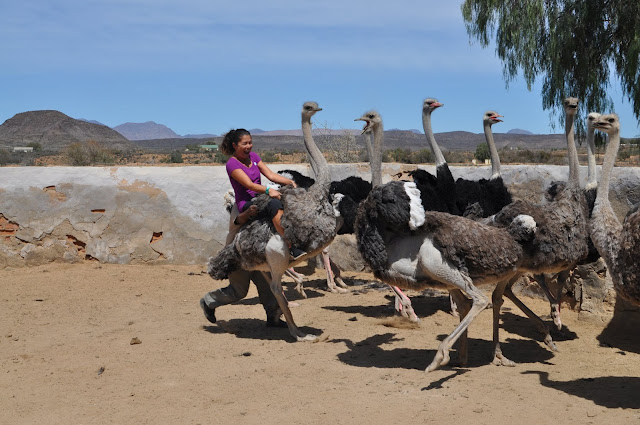 Click here to see a video of Sam riding his ostrich - It was hilarious!

To add to our adventure in Oudtshoorn we took the kids to a pizza and zip-line restaurant after our morning with the ostriches. They had a package deal to eat pizza and ride their huge zip-line down the mountain. They had a really great biltong pizza and the kids did their first BIG zip-line.

To get out of Oudtshoorn you had to take one of the passes over the mountain ranges. We went up the Swartberg Pass but only made it up to a certain point on a dirt road, took some pictures then headed back down. The next day we took the Outeniqua Pass out of Oudtshoorn that had a paved road and we made it to our next stop in Sedgefield. 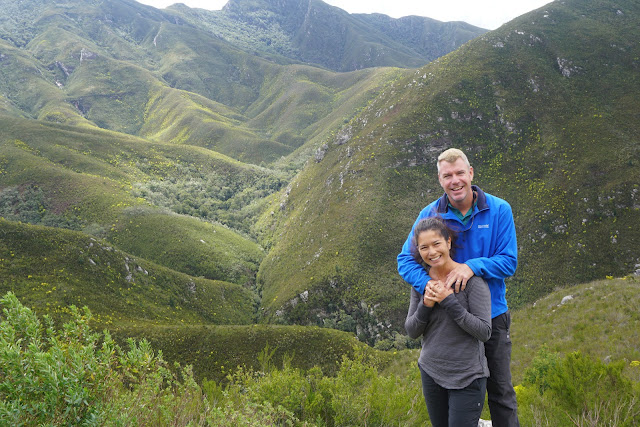 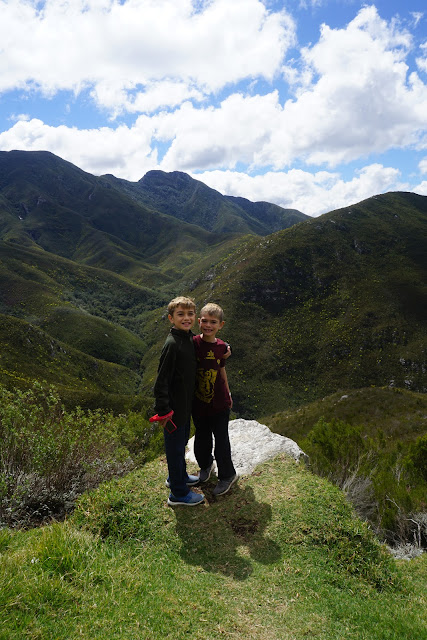 Teniqua Treetops – This was a very small family owned resort that Dan found when we were in Cape Town. The resort has about six treehouses that are nestled in a forest off of the Garden Route. We had the family treehouse that was a bit lower to the ground. The kids had to be a little older to stay in the taller ones. The kids had a great time hiking to the main house that had a common room with Legos and books.

What we did we do in Sedgefield?

This was a stop that we made just to stay in a cool tree house. We didn’t have a lot of plans when we arrived about what we wanted to see when we were in the area. One of the big benefits of family run accommodations is that the owners are very open to sharing some cool places to eat and things to see that tend to be a little less touristy.

We were pretty hungry when we arrived so went to a surf/beach restaurant that was recommended by our host. It was very windy and cold that day so we enjoyed some fun drinks and ate some pizza. They even had a “art” room in the restaurant where the boys painted pictures and made cool figures out of pizza dough that they baked in the wood fire oven.

The next day was Saturday and our host recommended that we check out the Saturday market.  This was such a cool market with lots of great food, fun things to look, and some great veggies. It had a very cool and relaxed vibe.

After the market we had pondered over making the 40 minute drive to Monkeyland. Our host had recommended it but we thought it might be a bit touristy. In the end we decided to try it and we are so happy that we decided to go. When we arrived we saw the baboons outside with warning signs not to feed them or go near them. We were slowly learning these guys are not the most loved animal in Africa. When we walked into Monkeyland we were greeted at the gate with double doors and told to take off our sunglasses and store them in our bags. When we asked why she told us that the monkeys can be little thieves with sunglasses. We were still unsure of what to expect. Our first thoughts were that it would be a bunch of monkeys in cages that we read about and move on. Boy, were we wrong! When we were waiting for our tour to start we quickly realized that the monkeys were loose and not in cages. There were lemurs right next to us!! We had a small group of 9 people and one guide and she walked us through the sanctuary explaining the different types of monkeys they have and why they are there. We learned so much about how cheeky these monkeys can be!!

Knysna Elephant Park – We only stayed here one night but this was voted the favorite lodging on the trip. This elephant sanctuary has about 6 rooms that you can stay in and they all open up over the elephant boma so you can watch the elephants at night. No glass or screens! It was amazing. We just sat out in the living room and watched and listened for a long time. We also learned that an elephant trumpeting at night is enough to make you jump out of your bed!

What we did we do in Knysna?

The elephant park was really the experience here.  We got to feed and walk with the elephants as soon as we arrived! A perk of staying there was that they took you on a morning walk the next day before the sanctuary opened to the public. We walked pretty far away from the lodge to another field where the elephants were eating breakfast and our guides let us get up close with the elephants. One of our favorites was Sally who is the oldest elephant in the part and one of the original two elephants to be rescued. They are truly amazing animals! When we were taking pictures of her she was playing with the kids and threw grass on Sam. After our visit Emma told us she would be coming back to the park to join the research team in the future. This is the place where her love for elephants was born! 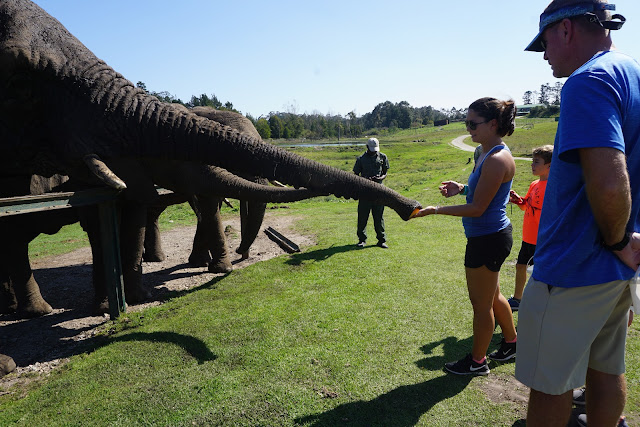 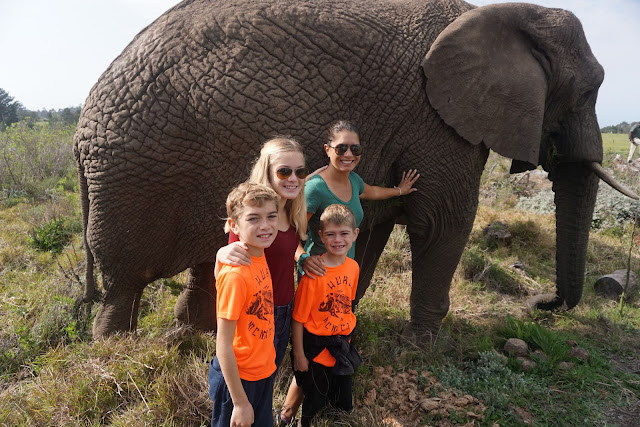 Kragga Kamma Game Park -  when we were planning this trip we quickly realized how expensive the game park lodges are in Africa. We were lucky to find a budget friendly option near Port Elizabeth. We stayed right in the park but we had to make sure we had all of our food for dinner since we were also locked in the park at night! 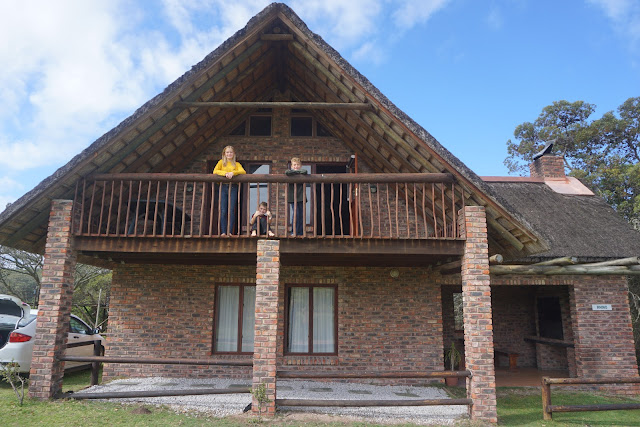 What did we do in Port Elizabeth?

On our way to Port Elizabeth we stopped at a the Tsitsikamma National Park. It is right on the coast of Africa and they had a great hike to some amazing suspension bridges. We wanted to stay longer but we had to make it to the lodge before they closed and locked the gates. 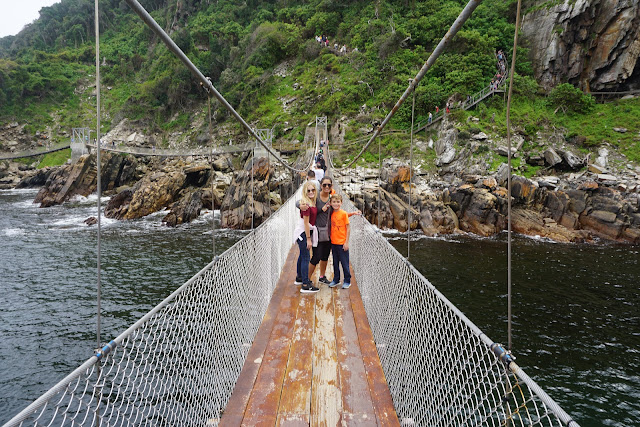 When we stayed in the park we were treated to a fun safari drive with a guide. This is the first time we saw rhinos, giraffes and water buffalo. We even saw some of our old friends – the ostrich! There was a huge wind storm that came through while we were there and it sounded so cool with our thatched roof. 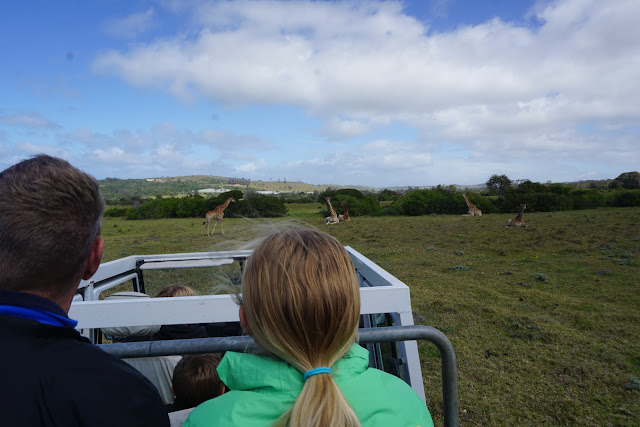 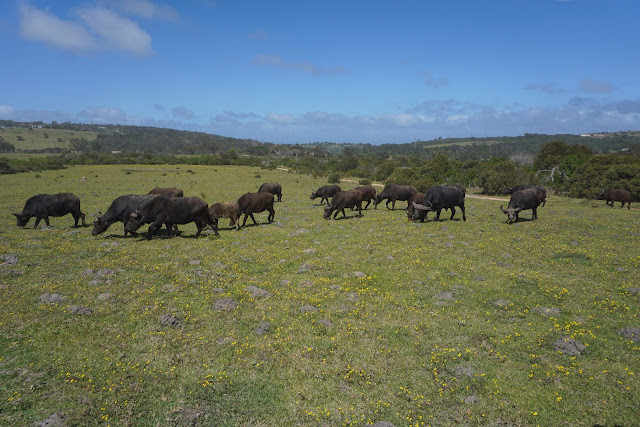 We also visited our first big national park with animals – the Adodo Elephant Park. We had a fun day driving around and seeing some of the elephants, zebras, ostriches and even a few bones lying around. Visiting this park made us even more excited to make our way north to Kruger National Park. 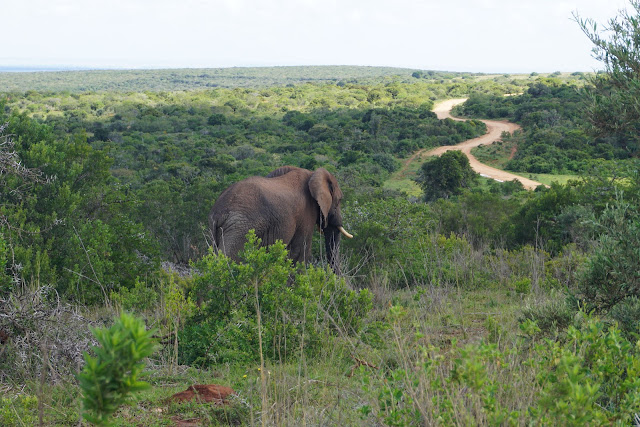 We had an amazing time exploring the Garden Route of South Africa. Now on to our next chapter in our Africa adventure - Kruger National Park in the RV we called The Beast!
- January 21, 2019