Just north of Highborne Cay is Allen Cay which is home to a subspecies of the rock iguanas. These particular iguanas are one of the most endangered species in the world. When I say Allen Cay is home to these iguanas it really means they are the only ones living there. They draw a fair amount of attention from the tour boats so we waited a until they left to go see these creatures. These guys were really amazing to look at up close. They have been here for many many years. The adult iguanas have no natural predator but the small ones can be eaten by birds or snakes. They lived pretty peacefully until the arrival of the Europeans when they brought animals such as dogs, cats, goats, and hogs that preyed on the iguanas.

We did decided to feed these guys but we were careful to only bring these herbivores fruits and vegetables.  To feed them we used a stick to limit the amount of sand on the food. They were pretty fun to feed. Some were shy and some were pretty bold. A few even jumped up for the food.

After feeding them the kids played in the water and found the remains of a small boat just off the shore. 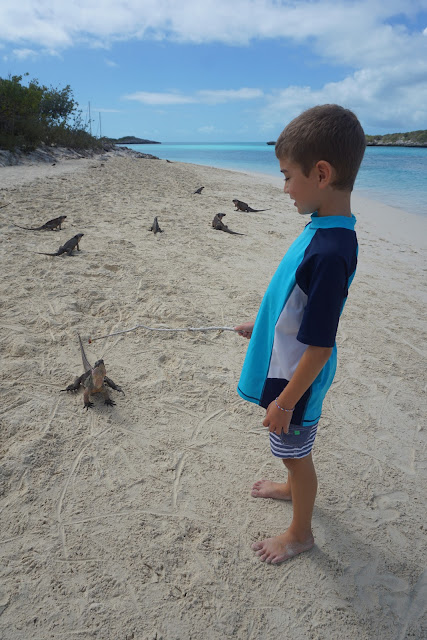