Valentine’s Day is the second holiday we have experienced on the boat that we felt the difference between land and water. Usually the we spend a fair amount of time creating valentine cards for classmates and the kids make boxes or bags for their card exchange at school. This year they do not have classmates so we had to come up with a different plan. We were at a marina in the morning so they made a couple of valentine cards to hand out to some boats that were at the marina. There was another kid boat that had a 4 and 5 year old onboard so they drop off a little valentine to them. Sam decided to put all of his effort into one card for the dog on one of the boats. The dog’s name is Rocket Man. He had made friends with Rocket Man a few weeks ago during our first visit to Marsh Harbor.

So where did we go in the afternoon?? As I mentioned in our first post we were planning to go to Man-O-War Cay to get our sail bag repaired after the zipper line accidently snagged and pulled some of the pulleys and rip the bag in the corner. BUT – this is a big but…… We had heard about a music festival happening over in Elbow Cay. After looking at the schedule we realized that if we wanted to see one of the shows it would have to be Valentine’s night. The next night had a $20 ticket price and after that we were going to head south to get ready to leave to Abacos.  So we had to weigh our options….sail bag repair vs cool music concert. You can guess what we picked -  cool music concert. After looking at the sail bag we decided that we could do our own repair.

In the afternoon we headed over to Elbow Cay and anchored the boat near the entrance to White Sound. Emma made cupcakes and we grilled some steaks for our Valentine’s dinner before we headed into Sea Spray Marina for the concert.

The name of the festival is Songwriters in Paradise. The performers are primarily songwriters out of Nashville. They are not necessarily people you know from the radio but they write some of the songs that you hear. They do a different type of concert each night at different locations around Elbow Cay. For the Valentine’s concert it was a round robin style concert with 3-4 artist for each set. The setting was very casual. Just guitars and artists. The talent was amazing. I have no musical talent so I am in awe of people who do.  It was so laid back they didn’t even have security and the artists just mingled in the crowd. On stage they would chat and make jokes between songs. In the first set one of the songwriters was Mark Bryan who is the guitarist from Hootie and the Blowfish. He played the most popular Hootie and the Blowfish song – “Hold My Hand”. About halfway through the first set he called up a friend to sing with them. His name was Mike Mills who turns out is the bassist for R.E.M. I was super excited….I love R.E.M. The kids gave me the “you are so old” look because they had no clue what I was talking about. They played a song that was written by the drummer from R.E.M that was never recorded. I thought it was very cool!  I still can’t believe they have an event like this on this tiny island in the Bahamas that you can only reach by boat. Check out their website: Songwriters In Paradise.  They have a cool video that they did from their visit in 2016 of Hopetown and the song is about the festival.

Here are a few pictures between sets: 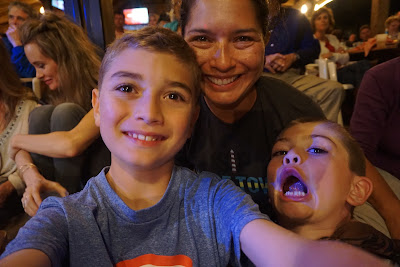 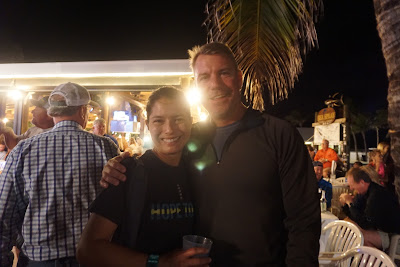 This was a great ending to our time in the Abacos. We will miss these beautiful islands and hopefully we can return in the future!