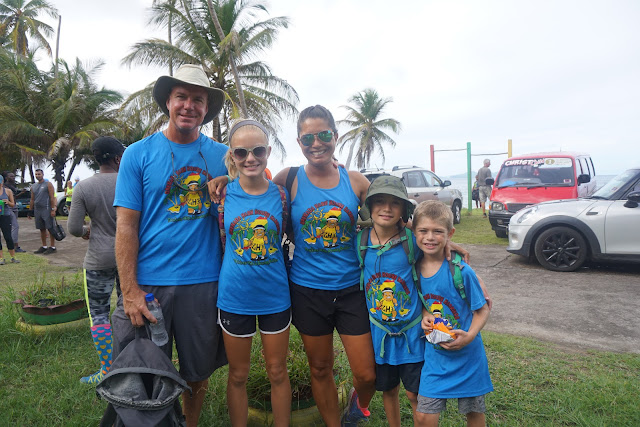 
So you read about our first eventful hash where we lost the kids. Since then we try to hash every Saturday with this fun group that is made up of locals, cruisers, students and expats. It is hard not to have fun with the hash harriers. Each hash has been in a different part of the island and each location had very different scenery. Part of the charm of hashing is that you have to commit to spend your entire Saturday afternoon and sometimes evening, make a BIG effort to get there, you get to enjoy hiking all over the island and you learn to lime with the locals.

Here are some highlights from the rest of our hashes this summer. Each section is titled with the location, a little bit about the hash and A LOT of pictures. We always try to take some pictures of the start/end location, the trail, and anything in between:

Gouvyave
This was our second hash and we took the trip up to Gouvyave on the hash bus. This was about an hour drive north from downtown and our first trip on the bus. They usually have two buses (the bus drivers are hashers too) that take people to the hash every week. We learned very quickly that the bus is packed to over capacity.  It was ok on the way up but after the beer shower and hiking for two hours it was a bit smelly on the way back.

The Gouvyave hash was absolutely beautiful and took us through a Grenadian rainforest. Of course, it did not go off without a hitch. It rained on the way to the hash which had the "hare" running around and altering the trail because of the mud. Well....because of the altering of the signs and paper piles it was a little confusing and half of us went on the runner's trail backwards. In the end it was a blessing since the runners trail was really where the scenic views were but we were the last hashers to arrive back at the start. But...remember what I said about any reason to party. Well, since half of us went on the trail backwards they "punished" the poor hare at the end during the celebration.

BBC Beach – Bastille Day Hash
This hash was on one of our favorite beaches in Grenada. This is considered a close hash that is near downtown so there were a lot of people who came out to have some fun. BBC beach is in a nice little cove with almond trees for shade and a small inflatable park so we have spent a few afternoons here this summer.  The hashers are always looking for a reason to celebrate so they called this the Bastille Day Hash. Grenada is not a French island so it truly was just a reason to party. We were  told to try to wear red, white & blue and the French hashers had to sing the national anthem before the hash. Again, you never know what to expect from each location. We hiked along the beach and then took a turn up a mountain and climbed to the top and walked the ridge to the next harbor and then back down walking through a very cool yoga resort. We are pretty sure there was not a lot of peace and mediation going on when we walked through with 7 kids.


Bathway Beach
This was our second trip out to Bathway Beach but our first one in daylight. The last time we were here we were watching the nesting Leatherback Turtles. This is probably the furthest hash you could go to from downtown. It was a good 2 hour bus ride. Again, each location is so different. In Bathway we did not get the rainforest or just the beach. We were pleasantly surprised by a beautiful hike through the rolling pasture mountains and finishing along the beach. The views were amazing!


The Port
This was our Carnival weekend hash that started out at the port in downtown St. George. It was literally in the port. We were surrounded by cargo containers. We took off from the port and climbed the mountain from the botanical gardens to the prison. It was a pretty vertical hike so it was hard to take pictures while we were climbing. The walk down was easier since it was on a road but I must have looked pretty tired because one of the buses asked if I wanted a ride down the hill. After filling up on BBQ and drinks we headed to the stadium for the Panorama concert that you read about in the last blog post. It was an exhausting but very fun afternoon and evening.


Mt. Rodney – our last hash for the season!!
We took a very LONG bus ride up to Mt. Rodney on the very northern tip of Grenada. It was about a 2 hr bus ride but we had the crew from SV Love & Luck with us so we had a good time chatting along the way. I know I sound like a broken record but it is amazing the areas you get to see by doing the hashes! We never would have ventured to the tippy top of the island on our own. The starting point was a fun beach bar and we quickly went into the rainforest. This one might go down in the books as our favorite for the season.